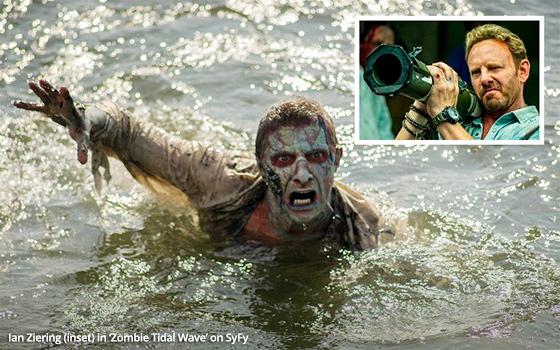 Who says TV is no fun anymore?

Well -- ahem -- I did, as recently as last April in a TV Blog reviewing a new limited series then premiering on CBS called “The Red Line.” This was a miniseries made (presumably) as entertainment that dealt with a fatal police shooting of a young African-American man wearing a hoodie who turned out to be a doctor.

“Once upon a time, watching TV was actually fun,” I complained in my review of that dreary, depressing show. “Increasingly today, this is not the case. As noted many times here, TV comedies today contain no laughs, and the dramas are unrelievedly sad.”

Naturally, I still hold with what I wrote then. But at the same time, I am willing to concede that there are exceptions to TV's current “no fun” trend. And one such breath of fun, fresh air is this new made-for-Syfy movie called “Zombie Tidal Wave.”

When it comes to this movie's title, what you read is what you get -- zombies, lots of them, who are cast ashore on a tidal wave from an ocean that apparently does not want them. The result is a kind of violent havoc that once was the province every summer of airborne sharks in Syfy’s series of six “Sharknado” movies.

But earlier this summer, a Syfy press rep confirmed, sadly, that the network’s “Sharknado” series is over. So say good-bye to shark tornadoes -- and hello to a zombie tsunami!

Actually, make that two. There were two such tidal waves in the movie's first hour. And each of them threw untold hundreds of hungry zombies into a beachside town full of tourists.

But don't worry -- it's Ian Ziering to the rescue! Twenty-nine years after the premiere of the show that made him a TV star -- “Beverly Hills 90210” -- Ziering, now 55, is the hero of “Zombie Tidal Wave.” It is the same role, with a different name, that he assumed in all six “Sharknado” movies.

This summer has actually emerged as the summer of Ziering, who is also co-starring in “BH90210,” Fox's revival of the old “90210” starring the original cast, all now middle-aged.

It has also been a summer of sharks, with the Discovery Channel and National Geographic loading up their schedules with their own annual shark shows.

Not to be outdone, Syfy is bringing back every shark movie it ever aired in a shark-attack marathon lasting most of the day on both Saturday and Sunday this weekend. The marathon serves as a launchpad for “Zombie Tidal Wave,” which premieres Saturday night at 9 Eastern.

The list of Syfy shark movies airing this weekend (check on-line schedules for times) is so entertaining that the TV Blog feels the need to include it right here, starting at 9 a.m. Saturday: “Dam Sharks!,” “Atomic Shark,” “Zombie Shark,” “Megalodon,” “Sharknado,” “Sharknado 2: The Second One,” “Sharknado 3: Oh Hell No!,“ Sharknado: The Fourth Awakens,” “Sharnado 5: Global Swarming,” “The Last Sharknado: It’s About Time,” “Sharktopus,” “Sharktopus Vs. Pteracuda,” “Frenzy” (about a shark attack, not the Alfred Hitchcock movie of the same name) and “5-Headed Shark Attack.”

Ziering is such a hero to Syfy that “Zombie Tidal Wave” has been co-produced by Ziering's own production company. Could it represent the start of a new summer franchise for Syfy? We can only hope.