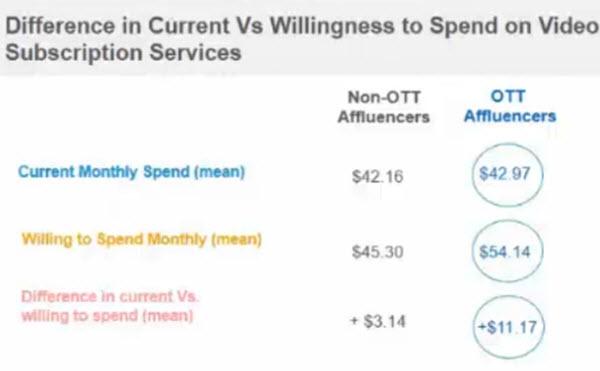 It’s no secret that affluent consumers have a weighty influence on U.S. spending.

Specifically, although they represent only 20% of the population, households with incomes of $125,000 and over account for 60% of total household expenditures, according to the Ipsos research firm, which has been fielding its Ipsos Affluence Survey (IAS) for 43 years now.

Ipsos has also identified a subset of affluents who have even more disproportionate power in terms of influencing the purchases of others — dubbed “affluencers.”

Recently, the firm zeroed in on the OTT/streaming attitudes and behaviors of affluents — including “OTT affluencers” who are at the forefront of video and other content consumption through these still relatively new platforms.

Ipsos used its Spring 2019 IAS (24,987 respondent households at that $125K or higher income level) as a foundation, and then fielded a re-contacting survey in April (1,004 IAS respondents) to probe their “new TV” profile.

For comparative purposes, the researcher also fielded a smaller survey (209 respondents) of households with income under $125K.

While the results’ confirmation of affluents’ power may not be all that surprising, the magnitude of their impact on the current new-TV environment should certainly grab the attention of all platforms that are hoping to survive and thrive in the so-called “streaming wars” ahead, as well as every consumer brand advertiser.

For starters, 77% of U.S. affluents subscribe to at least one streaming service, versus 62% of those in the below-$125K population sample (which I’ll call “non-affluents,” for short), reported Michael Baer, senior vice president, head of audience measurement for Ipsos, in a recent webinar.

In addition, 56% of affluents subscribe to premium TV channels, compared to 37% of non-affluents.

These differences would be even greater if consumers who are paying zero for services were included in the calculations, Baer noted.

Ipsos measures affluencers over 22 categories, and has consistently found that they lead the way, particularly in categories that are undergoing transformation.

Category affluencers are far more passionate and engaged about a category than others, have very high purchase intent, are early adopters, and are five to 10 times bigger spenders in the category than non-affluents — which is why others look to them for expertise, of course.

In engagement, OTT affluencers are heavy binge watchers, indexing at 129. (Because binge-watching has become commonplace, that may not appear that high, but it’s significant, according to Baer.)

In purchase intent, they’re willing to spend an additional $9 per month — $2 more than the general affluents subset.

In early adoption, they index at 208 for “I’m always on the lookout for new shows.”

The capper on this pyramid: They index at an impressive 558 on “I often give advice to people on what to watch.”

On average, they’re willing to spend $54.14 per month on video services, compared to $45.30 for non-OTT affluencers.

Further, 68% say they have the primary or final say in subscribing to video services, versus 48% for non-affluencers.

The kicker: Affluents across all categories — including OTT —"have a fundamentally different view of advertising than non-affluencers,” stresses Baer. “They don’t view it as an interruption; instead, they view it as another way to stay engaged and up-to-date on the category they’re passionate about.”

They agree with statements such as “Advertising helps me know what new products are available,” and “Brands with good advertising are higher-quality,” reports Baer.

When it comes to making viewing decisions, because they are active information seekers, OTT affluencers are more likely than non-affluencers to pay attention to recommendations from friends and family (63% versus 48%); advertising on television (54% versus 43%); family/friends’ posts on social media (39% versus 25%); magazine/newspaper articles (26% versus 18%; and ads on social media sites (25% versus 13%), among other factors.

They’re not much more apt to use the guide/menu (33% versus 31%), which “makes sense, because that’s a more passive” means than the others, points out Baer.

Fully 80% of OTT affluencers agree that “paying for content that I value is worth it” (they index at 161 on this) versus 7% of non-OTT affluencers. 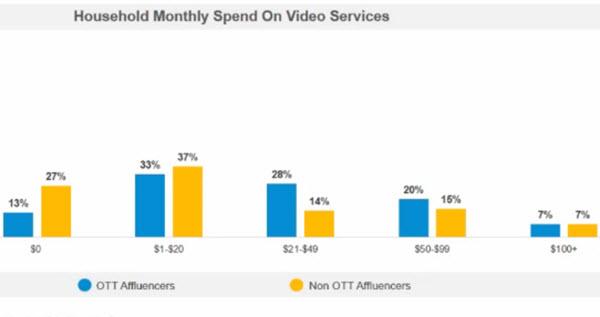 In terms of viewing behavior, OTT affluencers spend more time viewing services, and they watch a wider variety of content, with a particular penchant for drama, comedy, reality and movies.

And when considering subscribing to new services, they say they “want it all,” says Baer.

They are most differentiated from other affluencers and non-affluecers by their valuing of original content, and least differentiated when it comes to live television (news and sports), he notes.

And They Still Buy Cable…

The good news for “traditional” TV: Despite all of the above, 63% of OTT affluencers still pay for cable- or telco-provided services (18% have satellite).

The research goes into considerably more detail on affluents’ content preferences, services spending, viewing behaviors and attitudes toward OTT… but I’ll let you watch the webinar yourself to absorb all of that rich information.

My point here, again, is that brands and platforms alike that underestimate the power of affluents in general, and OTT affluencers in particular, do so at their peril.