'Baskets' Case: Say Good-Bye To Louie Anderson In A Dress 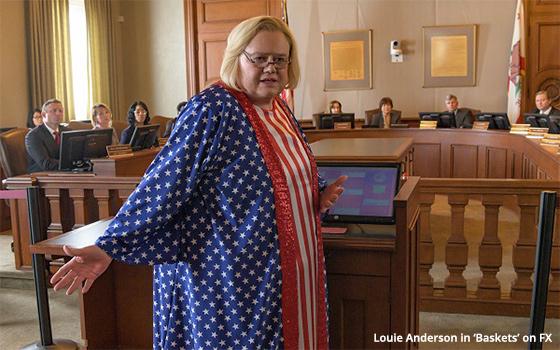 Say good-bye to the most fascinating performance on TV. And while you're at it, say farewell to the saddest comedy ever made for television too.

It's all in the same “Baskets,” the FX comedy about a sad clown in which comedian Louie Anderson played a woman and won an Emmy. This week, on Thursday night, the show has its series finale after four seasons.

By all appearances, Anderson's portrayal of Christine Baskets, mother of adult twins Chip and Dale (both played by Zach Galifianakis), was not in any way meant as a statement for or against transgender lifestyles or issues.

At the very least, Anderson has never positioned himself as a crusader for transgender rights and recognition. Casting him as this female character was certainly novel. And Anderson has talked about it almost strictly as an acting job for which he applied traits and mannerisms he associated with his own mother.

Christine Baskets came along at a time when transgender issues and transformations were winning inclusion in the popular culture and the news cycle.

The debut of Amazon's critically acclaimed “Transparent” in February 2014 may have gotten the ball rolling. The following year, in 2015, Bruce Jenner made news for several months as he transformed into Caitlyn Jenner.

Half a year later, “Baskets” premiered in January 2016, and Anderson won an Emmy the following fall for the show's first season.

Anderson's performance remains the show's best feature right through to the very end. (The TV Blog previewed the series finale this week, graciously provided by FX, in advance of its air date.)

This portrayal is not just some comic doing an over-the-top drag routine like he’s Milton Berle from the dawn of television. On the contrary, Anderson takes this outlandish character -- who, after all, is just himself in a wig and a dress -- and makes her real. It is nothing short of astonishing.

It is not especially funny, however -- which is a way of segueing into a subject that has arisen previously in discussions in the TV Blog about “Baskets.” Perhaps due to the renown of its principal actors and producers, anyone who encountered this show had every reason to believe it would be comedy.

It came from Louis C.K. (who became persona non grata after he was revealed as a sexual harasser), and it starred Anderson, a stand-up comedian, and Galifianakis, whose best-known movies are comedies (such as the “Hangover” series). And “Baskets” is a half-hour show.

But it was never funny like a comedy. In fact, it was often drearily and unrelievedly sad. Perhaps it was best enjoyed as a drama. Apparently, enough people enjoyed it in this way for it to last four seasons.

As regular readers of this TV Blog know by now, this column was not exactly a fan of this show. But its final episode effectively closes out the story of Chip Baskets and his unhealthy relationship with his mother, and to some extent, his twin brother. Without spoiling anything, changes occur to the family, and some good-byes are said.

The final moments of “Baskets” were so effective, and affecting, that even the TV Blog felt sad to see it go.