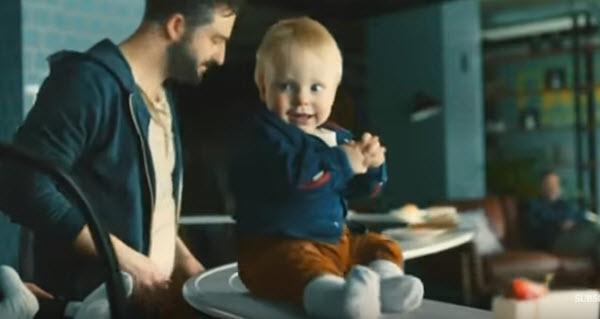 The rules, which began to be enforced as of June, are meant to help quash gender stereotypes that contribute to problems including unequal pay and career opportunities limitations.

All major UK advertisers have agreed to abide by the policies of ASA, the country’s advertising self-regulatory body, and these new rules were the result of an industry review process, according to The Guardian.

The Philly cream cheese ad in question (screen grab above) ows two young fathers in a lunch spot who become so absorbed in enjoying the cheese on bagels that they fail to notice that their babies are being carried away on the self-serve conveyor belt. One man suggests, “Let’s not tell mum.”

The VW ad, for the electric eGolf, shows a man and woman camping in a tent on a cliffside, men experiencing weightlessness in a space capsule, a male para-athlete, and a woman with a baby carriage sitting on a bench as an eGolf drives by. The message: “When we learn to adapt, we can achieve anything.”

ASA censored the ads after complaints from the public.

Some asserted that the cream cheese ad perpetuates a stereotype of men as ineffective parents.

The brand’s parent, Mondelez UK Ltd., said the ad was meant to humorously portray the product’s distracting appeal. The company argued that the same message would be conveyed if the men were replaced with women — but that, ironically, the brand had intentionally chosen to show men taking an active role in childcare.

The VW ad drew complaints that the woman in the tent is shown sleeping—a “passive” role—and that the woman with the baby carriage depicts a stereotypical female care giver role, while men engage in adventurous activities.

Volkswagen Group UK Ltd countered that the ad was meant to convey parenthood as one of several life-changing situations in which adaption is critical, “regardless of the gender of the parent depicted,” reports The Guardian.

However, Clearcast, a non-governmental body that pre-approves most British TV ads, disagreed, saying that the ASA’s interpretations of the ads and its guidance go further than Clearcast anticipated, and “has implications for a wide range of ads.”