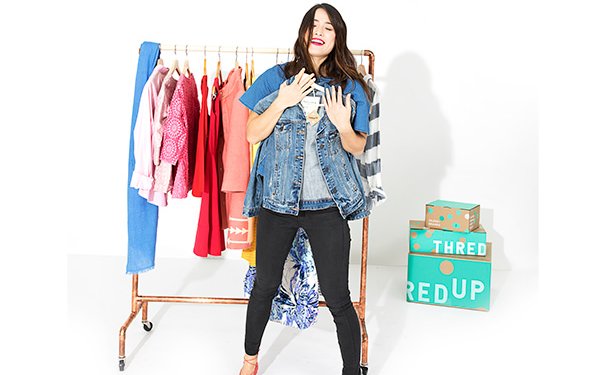 What’s a struggling retailer to do? Apparently, what everyone else is doing. Last week, both JC Penney and Macy’s announced plans to sell used clothing in stores, echoing moves from companies as varied as H&M and Neiman Marcus. And Banana Republic unveiled a new subscription program.

The announcements show just how far mainline retailers are willing to go in their bid to stay relevant to young fashionistas, who are increasingly flocking to D2C brands like Stitch Fix, Rent the Runway, Poshmark and the RealReal.

Both Macy’s and J.C. Penney announced partnerships with clothing consignment brand thredUP, and both did so in the wake of sobering financial reports.

J.C. Penney, based in Plano, Texas, says that it is putting the shops in 30 of its JCPenney stores, ranging between 5,000 and 1,000 square feet each. They will offer a selection of thredUP’s secondhand women’s clothing and handbags. It plans to curate and refresh the shops weekly, to keep offerings exciting. And Macy’s says it will open thredUP shops in 40 stores.

The announcement came on the heels of a particularly dismal quarter for Penney, with comparable-store sales plunging 9%. (Excluding the impact of its recent short-lived jump into the appliance business, sales fell 6%.)

Observers aren’t confident the thredUP initiative can do much to move the needle. While Neil Saunders, managing director of GlobalData Retail, writes that he is happy to see Penny trying new ideas, “the impact of this is somewhat undermined by the fact Macy’s is also teaming up with thredUP.” Besides, he says small-scale initiatives, “such as high profile launches of own-brand ranges -- are needed to move the dial.”

“The fact JC Penney is broken is well known,” he writes of the earnings report. “The question is: can it be saved? On this front, we are not optimistic… we question whether it can work quickly enough or if they will deliver to the degree required to save the company.”

To give a sense of how poorly the company is doing, the value of its stock has fallen so low that it faces a potential delisting from the New York Stock Exchange. Delisting warnings are triggered when a stock trades below $1 for more than 30 days.

Banana Republic, owned by Gap Inc., says is launching Style Passport, an online subscription service offering unlimited access to women’s clothing. It intends to debut the service next month and says it may add men’s apparel at a later date.

For an $85 fee, users can rent three pieces per month, with the option to buy a favorite item. It includes free priority shipping, unlimited exchanges and returns as well as complimentary laundering services.