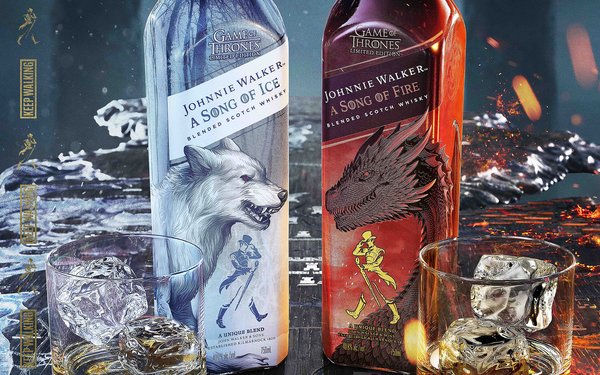 Two new Scotch whiskies from Johnnie Walker “inspired” by “Game of Thrones” are being introduced today for a limited time, exactly three months after the hit HBO series’ conclusion on May 19.

House Stark’s version is called A Song of Ice, which Johnnie Walker says is “from one of Scotland’s most northern distilleries” called Clynelish. Its bottle uses frosty blue and gray colors. It’s best served over ice and has a 40.2% alcohol content.

House Targaryen’s A Song of Fire’s alcohol content is just slightly higher, 40.8%, and the brand says its flavor profile evokes “subtle smoke from the peated malts of the Caol distillery” in Scotland. Its deep red bottle pays homage to fire-breathing dragons. The brand says this version is supposed to be served neat.

Before the eighth season of the show, Johnnie Walker introduced White Walker, a moniker referring to the feared humanoid characters in that series. Using temperature-sensitive thermal ink chromatic technology, the brand revealed the series’ famous tagline, “Winter is Here,” when the bottle was frozen.

Johnnie Walker sales were up 9% in 2018, and the company attributes that to the White Walker promotion.

So can it catch lightning in a bottle a second and third  time? A spokeswoman told Marketing Daily the new offerings are “best purchased together — and we think these bottles will make a unique gift for whisky and ‘Game of Thrones’ fans alike this holiday season.”

When the new bottles are stood next to each other, Johnnie Walker’s iconic “Striding Man” logo uncharacteristically faces backwards on the A Song of Fire bottle, and so appears to be heading for a face-off between the Striding Man shown on the Johnnie Walker A Song of Ice bottle.

These two brand extensions come after fans and critics generally panned the last season and particularly the last two episodes of "Game of Thrones." Given the build-up for the finale, the series ended with a thud, not a bang, and got very low ratings from the Rotten Tomatoes website.

Generally, tie-ins between brands and entertainment vehicles appear when the movie, TV show or album is new, not months since the last piece of fawning “Entertainment Tonight” coverage.

These two new Scotches join a veritable liquor store of products with some tie-in to “Game of Thrones.” Most prominently Cooperstown, N.Y. craft brewer Brewery Ommegang has released 15 "GoT"-themed beers since March 2013. Vintage Wine Estates has four “GoT” varieties. And even before White Walker, Diageo brands had produced eight other single malt Scotch products by different brands that were tied to the HBO series.