Atomo To Launch Molecular Coffee Products Without The Beans 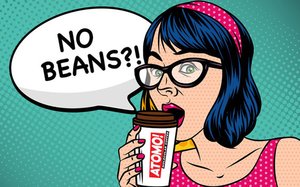 Is the world ready for molecular coffee? That is, coffee concocted in a laboratory with the same taste, aroma and caffeine, but without the bitterness — or the bean.

Seattle-based Atomo hopes so. The company (whose name means atom in Italian) recently announced it has secured seed funding of $2.6 million to create and distribute what it considers the first molecular coffee. It contains no coffee whatsoever but is a reverse-engineered product whose ingredients the company has not disclosed.

“By replicating the taste, aroma and mouthfeel of coffee, we've designed a better tasting coffee that's also better for the environment," Atomo says on its website. The company’s process involves replacing the “polysaccharides, oils and proteins found in the insoluble part of the coffee ground with natural, sustainable and upcycled plant-based materials that deliver the same great effect.”

As The Hartman Group notes in its Food and Technology 2019 report, the rise of plant-based ingredients increasingly asks consumers to confront “a significant cultural tension between their desire to retain some of the experience of eating meat and dairy and their desire to eat foods that are as close to their natural form as possible.”

As with other tech-driven food and beverage products, environmental sustainability factors could provide consumers “a hook for beanless coffee should coffee bean prices skyrocket; but unlike with meat and dairy, we see few other factors (e.g., animal welfare and personal health) to give consumers strong reasons to believe in the product,” Hartman said.

World coffee bean prices are near historic lows, according to the Hecht Commodity Report, and consumers have no shortages of ways to get a liquid caffeine experience. In August 2018, the price of coffee bean futures declined below the $1 per pound level for the first time since 2006, per Hecht, partly due to Brazil’s declining currency.

Atomo says its products -- starting with caffeinated coffee and moving on to decaf and other varieties -- will be priced “similar to specialty coffee.” It can be substituted ounce-for-ounce with regular ground coffee in drip machines, French presses, Aeropresses and refillable K-Cups.

Atomo is motivated in part by what it considers the bitterness in coffee that accounts for much of the use of milk and creamers, along with protecting the environment. The company cites a January 2019 study released by Science magazine stating that 60% of the world's coffee species were in danger of going extinct in the next 50 years due to climate change, population expansion and disease.

Plans call for Atomo products to be sold initially direct-to-consumers and through Amazon, targeting the fourth quarter of 2019, although the company hasn’t ruled out working with other brands for channel distribution.

As with such categories as bottled water, coffee keeps growing and iterating in flavors, varieties and distribution. A year ago, Nestle agreed to distribute Starbucks products, and earlier this year rolled out 24 stock-keeping units, with many more on the horizon.

“When developing the world’s first molecular coffee, there are of course unforeseen risks and challenges that could come along with the process, including development setbacks and ingredient sourcing difficulties,” Atomo has indicated in press materials. “However, to mitigate as many risks as possible from the beginning, we have partnered with Mattson, leaders in food and beverage science innovation with over 40 years of experience in the field.”

Mattson is an independent food and beverage innovation firm founded in 1977. The company says it has helped launch approximately 2,500 individual SKUs and hundreds of restaurant menu offerings.