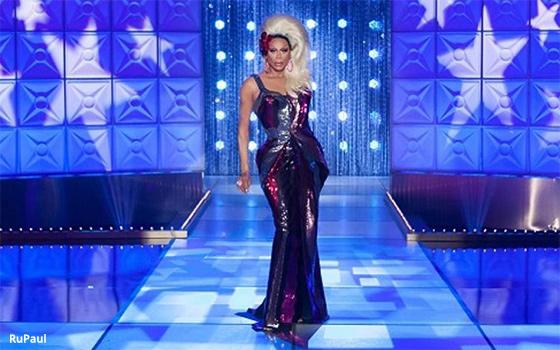 Another day, another photo of a man in a dress.

The renewals are good news because these shows have been among TV's most entertaining spectacles ever since the first season of “Drag Race” premiered in February 2009.

It was seen for its first eight seasons on the gay-oriented Logo channel. But the show became so popular that Viacom moved it in 2017 to VH1, where it has been seen ever since.

Though they are both wearing dresses in our consecutive-day photos, Louie Anderson as Christine Baskets and RuPaul in drag-queen costume are as different as night and day.

Anderson is a male actor playing a woman. He is not a transgender man. RuPaul is also a man (RuPaul Charles) who has made a career -- and by all appearances, a substantial living -- working in the entertainment form known as drag.

As far as the TV Blog can determine, RuPaul does not identify as a woman, as many (if not all) transgender men do (especially celebrity ones). As fans of his reality-competition shows know well, Ru appears frequently on the show in finely tailored men's suits. And few men look better in a suit than he does.

The TV Blog can attest to this, having met a very gentlemanly RuPaul in 2016 at an upfront presentation for the Game Show Network. If memory serves, Ru was wearing an impeccably fitted suit of red gingham. On just about anyone else, this suit would have looked like an altered tablecloth from last weekend’s picnic. But not on RuPaul. No siree, Bob.

Not too long ago, RuPaul explained the ins and outs of drag costuming and performing on a talk show (he was wearing a men’s suit at the time). He explained that “drag” is not the same as cross-dressing or transgender dressing. And it does not necessarily have anything to do with transgender identification either.

He pointed out something that should have been obvious, but had previously eluded the TV Blog: The personas of female entertainers that the drag performers assume and then showcase on “Drag Race” are not characterizations of “real women” at all.

Instead, the characters they create are wholly exaggerated and satirical. To RuPaul, who is nothing if not an expert on the art and craft of drag illusion, these characters can hardly even be classified as “women” in the traditional sense.

On this talk show, I remember that he posed this rhetorical question (paraphrased from memory): “What women does anyone know who actually dress like this?” The answer is none.

One of the great joys of RuPaul’s “Drag Race” shows is that he tends to treat the whole thing in two conflicting ways -- as a deadly serious competition and at the same time, as a big comedic joke. In his dual roles as host and chief judge, RuPaul might now be TV's reigning master showman.