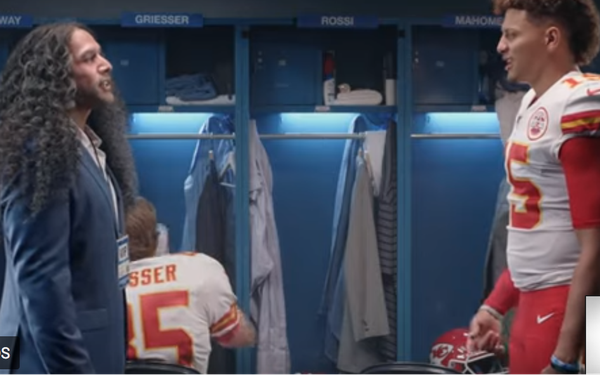 Recalling Miller Lite’s iconic “Great Taste/Less Filling” commercials from 45 years ago,  Head & Shoulders ad spots this fall will try to determine the truth behind an old football question: Which is more important, offense or defense?

The defense is represented by retired Pittsburgh Steeler strong safety Troy Polamalu, whom Procter & Gamble refers to as an  “iconic hair ambassador” because of his awesome flowing locks.

Head & Shoulders has been the official shampoo of the NFL for a decade, and it seems to be taking the Head & Shoulders “debate” as seriously as pro athletes did when they kicked around the major attribute of Lite beer in commercials from 1974-1991. Lite was preferred by jocks either because of its “great taste” or because it was "less filling.”

Those ads, from McCann-Erickson, took the Miller brand from obscurity to best seller, but only used former players, and not in uniform, as the NFL insisted for beer ads. (The NFL just loosened its regulations this year.)

In the current spot, “Using Head & Shoulders everyday is like great offense for my hair,” Mahomes says to a teammate in the locker room.

“No, no, no. It’s great defense for flakes,” answers Polamalu, apparently just walking through the clubhouse in street clothes.

Finally, Mahomes says, “MVP.” He was named the league’s most valuable player last year. Polamalu responds, “Super Bowl champ” and holds up two fingers, reminding the quarterback that the Steelers won the big game twice when he played for them.

The campaign consists of the spot that will run nationally on TV and digitally, supplemented with in-store advertising and through social media across platforms. Head & Shoulders partnered with Saatchi & Saatchi New York to develop the creative as well as Carat, Marina Maher Communications and MKTG to launch the  campaign.

In press material, Mahomes says, in a canned quote that's perhaps appropriately over the top, “I’ve always been a fan of Head & Shoulders. I use the shampoo daily and grew up watching the brand work with some real NFL legends. I’m one hundred percent team offense! If my squad can attack defenses and score points like Head & Shoulders attacks flakes, I’m confident in our ability to win games this season.”

Polamalu has his own implausiby earnest prepared statement: “I’m honored to show Patrick the ropes of working with Head & Shoulders, and always eager to talk about football. But I’m also here to remind the newbie that despite the NFL’s new offensive movement, whether it be on the field or for your hair and scalp, defense wins championships.”