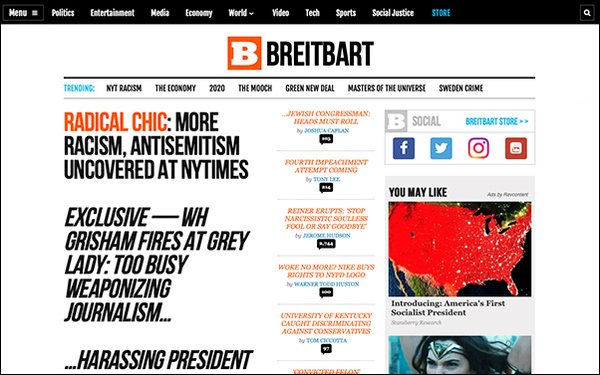 Breitbart experienced its first significant year-over-year traffic increase since March 2017, growing 8% to 6.4 million unique visits in July 2019 compared to July 2018, according to the TheRighting’s analysis of conservative websites, based on Comscore data.

“Stories that dominated headlines” in July, according to Polskin: Trump’s tweet encouraging four Congresswomen to return to their ‘corrupt countries’ the shooting at the Gilroy Garlic Festival, Robert Mueller’s testimony before two House committees, Trump’s tweets criticizing Baltimore and the second round of debates by Democratic candidates for president.

Once one of the most visited conservative sites after FoxNews.com, Breitbart has slipped under The Washington Examiner and TheBlaze.

Around that time, Facebook changed its news feed algorithm and Steve Bannon, the former Breitbart executive chairman, campaign chairman to President Trump and White House strategist, was pushed out of the administration and forced out of Breitbart.

The biggest dip in traffic for the top conservative news sites in July 2019 was The Federalist, which had a 52% dip in unique visitors year-over-year.

Unique visitors rose 15% for The Washington Post year-over-year, 13% for CNN and 6% for The New York Times, according to TheRighting’s analysis.