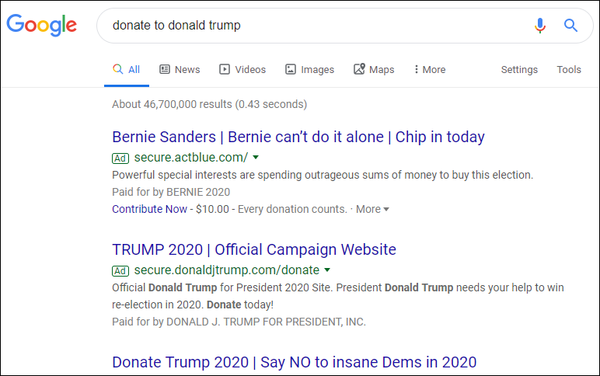 “Trump is squatting on Biden and he’s not answering,” said Marty Weintraub, founder of Aimclear.

Biden’s campaign is missing an opportunity. “I don’t see any pay-per-click ads or search marketing for joebiden.com,” Weintraub said. “There’s no pay per click history for Joe Biden.”

Apparently the search battle is between donaldtrump.com and actblue.com, the preferred Democratic fundraising engine tool.

Weintraub estimates actblue.com is spending between $3,000 and $5,000 monthly, focused mostly on candidates and issues, buying search keywords like the “official democratic party website” and “democratic national.”

Like it or not, Trump is playing by competitive search marketing rules, Weintraub said, whereas Biden is sleeping at the wheel.

“It is straight-forward competitive bidding, something Google originally didn’t allow, but changed their policy in the late 2000s to alignment with Yahoo’s policy,” said Jonathan Kagan, VP of search at Cogniscient Media.

Kagan said the only real rule is that marketers cannot use a trademark in the ad copy the brand doesn’t own, providing that the owner registered the trademark and put it on file with the engine.

“We saw Hillary do this in the last election cycle, bidding on Trump keywords,” Kagan said, adding that it happens frequently.

In a fundraising email sent to supporters, Biden’s presidential campaign wrote, according to cbsnews.com: "Trump's campaign is paying money to run ads online so that their donation link is the first thing you see when you search 'donate Joe Biden,' But, listen, here's the thing: We can't stop them because we're out of money to run online ads for the rest of the month."

It’s one in many search strategies, forcing Trump’s opponents to use their budget. If Trump outbids Biden, he can cause Biden’s campaign to extend their budget.