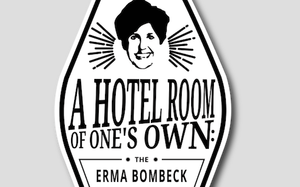 How do you market a workshop for humor writers being held in Dayton, Ohio?

The Erma Bombeck Writers Workshop, held every other year since 2000 at the University of Dayton, is thought to be the only writers’ meet-up specifically dedicated to humor and human -nterest writing.

In 2018, conference organizers concocted a contest  called “A Hotel Room of One’s Own” choosing two “humorists-in-residence." It’s a tongue-in-cheek award, but it’s also a real chance for a writer to get down to funny business.

The winners -- selected by a panel of judges -- each get an all-expenses paid, two-week trip to Dayton for the workshop, and all the extras the University of Dayton Marriott Hotel can possibly provide. They get free room service, plentiful bars of tiny soap, and specially designed bathroom robes noting their humorist-in-residence status.

What you win is time to think, notes the promotional blurb for the conference:. “That’s right: two weeks of dedicated time for you to ride the elevators, stare pensively
into the parking lot and swipe ham cubes from the omelet bar.” it reads, then adds, parenthetically, “Hey, who are we to judge your process?”

The idea was developed by Teri Rizvi, the workshop founder and director and UD’s executive director of strategic communications, who brainstormed with  Anna Lefler, a Los Angeles humor book author and a lifelong Bombeck fan. Lefler largely funds the humorist-in-residence program

Rizvi says she decided a sharp focus  on social media marketing would get the conference known. Ditto with the residence program.

“If you have a clever, marketable idea, you can target and reach so many people. I send out an e-newsletter monthly to nearly 6,000 writers,” and that’s fortified with strong Facebook, Instagram and Twitter content. The “incredible word-of-mouth does the rest,” she says.

“It's all in how you tell the story. Among all the bleak headlines of the day, this is a fun story — and a terrific opportunity for writers.”

Lefler says the event is “not just a place to hobnob. It is a conference with tough work sessions. That sets it apart from some workshops. You don’t get a lot of gristle” there. In fact, the workshop in 2018 sold out its 400 spots in five hours.

Bombeck, who died in 1996, became famous writing her devilishly clever “At Wit’s End” column for the now-defunct Dayton Journal Herald, eventually attracting millions of readers through her syndicated column and regular appearances on “Good Morning America.”