TV Goes To The Movies: From 'Breaking Bad' To 'Downton' 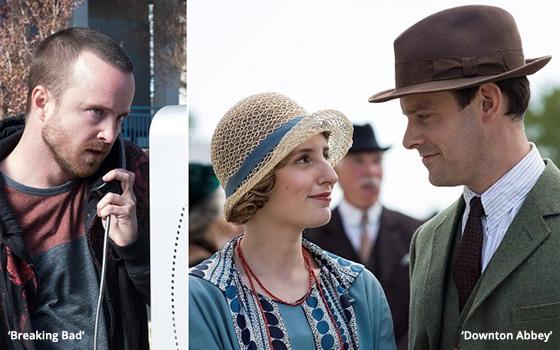 At least three critically acclaimed and hugely popular TV series are getting the one-off movie treatment.

Two of the movies are coming soon: “Downton Abbey,” due to be released in U.S. theaters on September 20 (after opening a week earlier in the U.K.), and “El Camino: A Breaking Bad Movie,” coming to Netflix on October 11 (and airing sometime later on AMC).

The third movie is the long-awaited “Sopranos” prequel titled “The Many Saints of Newark.” No release date can be found online, but it is widely expected to be released in theaters sometime next year.

The “Downton Abbey” movie title is simply that; it contains no embellishments such as “The Movie” or “Downton Abbey Returns.” The makers of the “Breaking Bad” movie, however, could not resist including the words “A Movie” in the title -- which is right up there with appending “The Musical” onto the titles of Broadway musicals. It serves no purpose.

The “El Camino” in the “Breaking Bad” title refers to the car in which the show's surviving main character, Jesse Pinkman (played once again by Aaron Paul, pictured above left), was seen driving away in the series’ final sequence (which aired on September 19, 2013). The show's main character, Walter White (Bryan Cranston), is presumed to have died.

Netflix has a very brief description on its press site of the new “Breaking Bad” movie, which was written and directed by series creator Vince Gilligan. “In the wake of his dramatic escape from captivity, Jesse must come to terms with his past in order to forge some kind of future,” this description says, setting the movie in a post-Walter White “present day” time period.

Meanwhile, according to a trailer posted on a web site for the new “Downton Abbey” movie, it takes place in 1927. In the trailer, fans of the show will catch glimpses of a slew of beloved characters from both the family and the service staff -- all of whom are preparing for a visit to Downton by the king and queen themselves.

They are not named or seen in the trailer (except briefly from behind), but these royals would be George V and his wife, Mary. According to Wikipedia, she was not technically queen, however.

If the trailer is any indication, all of the splendor of the Downton Abbey manor house remains intact in 1927, although it is difficult to understand how, given all of the changes that were already buffeting the manor-born during the final season of “Downton,” which ended in 2015. Perhaps this will all be explained in the movie.

The “Sopranos” prequel will reportedly take place in Newark in 1967 -- described as an era of urban upheaval characterized by, among other things, destructive riots.

In the midst of this turmoil, we meet a young Tony Soprano, who is played in the movie by Michael Gandolfini, 19, the son of the late James Gandolfini, who played Tony so memorably in the original HBO series.

According to various descriptions, the movie will have young Tony being schooled in the ways and wherefores of the family crime business by Dickie Moltisanti, father of Christopher Moltisanti, who was played by Michael Imperioli on “The Sopranos.”

“The Many Saints of Newark” was written by “Sopranos” creator David Chase and Lawrence Konner, a former “Sopranos” writer. Alan Taylor, who directed a number of “Sopranos” episodes, is the movie’s director.

Other cast members in the movie include Vera Farmiga (who might be playing Tony’s mother, Livia, although this has not been confirmed), Ray Liotta and Jon Bernthal (whose roles have not yet been reported). Alessandro Nivola plays Dickie.

These movies are welcome news for fans of all three shows who cannot get enough of them.