Late Summer, And A TV Blogger's Thoughts Turn To Fall 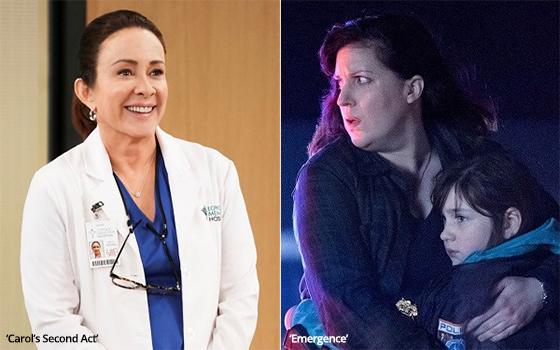 Patricia Heaton is not a 50-year-old, but she plays one on TV.

This is the given age of the title character that Heaton, 61, will be playing on CBS this fall in her new comedy series called “Carol's Second Act.”

The show is "about a woman who embarks on a unique second act after raising her children, getting divorced and retiring from teaching: pursuing her dream of becoming a doctor,” says CBS. “At age 50, Carol is a medical intern and must sink or swim with peers who are half her age. It’s her enthusiasm, perspective and yes, even her age, that may be exactly what will make her second act a great success.”

It is one of the mysteries of the fall season that this Carol character could not just be 60 or 61 -- which is as good an age as 50 to pursue a second career in medicine, especially a fictional one on TV. Oh, well, maybe 61 was considered too far out of the demo for a title character on TV, even on CBS.

With Heaton (pictured above left) as its top-billed star, “Carol's Second Act” at least qualifies as one new fall show worth paying attention to. She is one of TV’s top comic actresses whose best-known shows, “Everybody Loves Raymond” and “The Middle,” were gems.

One of the only others that breaks out and ignites mild curiosity is the new ABC drama called “Emergence.” Promo spots for this show have been seen more often on ABC this month than for any other of the network's new fall shows, with the possible exception of the new comedy called “Mixed-ish.”

“Emergence” is a drama that has something to do with a local sheriff (Alison Tolman, pictured above right) and a spooky, mysterious child who suddenly appears in the backseat of her car one night (according to the promos). Whenever I come across the title of this show, I cannot help but think of the energy drink called “Emergen-C.”

The girl in the show is played by a child named Alexa Swinton (also pictured). An ABC bio of this young actress describes her as an “actress, singer and writer.” She sings, she acts … and she writes too? For heaven’s sake, ABC, she's only 8.

What other upcoming new shows seem intriguing here in the waning days of summer? Not that many, when you get right down to it. Please note: The TV Blog has not yet undertaken the task of watching the premieres and pilots for the new shows, so this blog is highly preliminary.

But on their face, so many of the new shows the networks teased last May at the upfronts are coming across as the same old, same old.

As always, families -- some conventional, some not -- are still the foundation on which TV sitcoms are most commonly built. Fox has “Almost Family,” CBS has “Fam,” and ABC has the aforementioned “Mixed-ish.”

The fact is that overall, none of the networks have that many new shows premiering this fall. As a result, the outlook for the new fall season, at this very preliminary stage, is subdued.

On the other hand, some new show, or possibly more than one, could emerge as a surprise in the weeks to come. Miracles do happen, on TV as much as anywhere else.