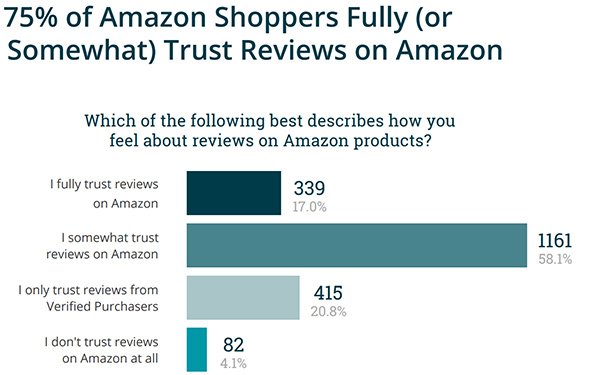 Most consumers look at review counts such as the number of reviews products receive and the quantity of star ratings to help them make a decision on whether to make a purchase. They don’t take the time to read each review to get the details behind the rating.

Not reading the reviews could actually hurt consumers -- especially on Amazon, according to Consumer Reports.

A type of review fraud called “review hijacking” seems to have become a major problem for Amazon. It happens when the seller of a product links positive reviews from another, unrelated product with its own to trick potential buyers.

Some marketers that track fake reviews believe the problem has diminished.

"Amazon does not make data available with regards to the volume of fraudulent reviews, but we have unquestionably seen a significant decrease in the frequency of 'unnatural' reviews over time," said Pat Petriello, Tinuiti head of marketplace strategy, in an email to Search Insider. "While this was an issue that often plagued sellers between 2015 and 2016, it is much more rare now. We have also observed that a sudden increase of reviews for a given product are often reviewed and removed quickly by Amazon's automated system, reducing the motive for would be bad actors."

Others believe the problem continues to worsen.

Consumers can easily identify the number of fake reviews by going to Amazon, clicking on a link, and copying and pasting it into the Fakespot engine, which tracks fraudulent reviews on Amazon and other e-commerce sites.

Some of the products with fake reviews end up as an Amazon Choice product. For example, analysis of the reviews for the Potensic T25 GPS Drone on Amazon suggests deception. The content quality is low, with Fakespot estimating that only 78.7% of the 235 are reliable. The same is true for the Hobbytiger H301S Ranger Drone with Live Camera Video, with Fakespot analyzing 112 reviews, estimating only 77.8% are reliable.

Fakespot, a New York-based startup, estimates that overall 34.65% of Amazon reviews are suspect, according to one report -- and the problem only continues to worsen as the company grows. Promotional, paid, or inauthentic reviews rose 1.13% across Amazon from June 2017 to July 2017. In June 2018 to July 2018, they surged 11.89%.

The Consumer Reports analysis found eyelash growth serum under an electronics product, for example. But the fake review problem isn’t limited to electronics accessories, as the analysis states.

Most of the reviews for an Amazon’s Choice posture correction brace with 561 reviews had an average rating of 4.8 out of 5 stars, and nearly all of the reviews were for other items such as dish soap, wooden spoons, garbage bags, dishwashing wands, and allergy medicine. There were only a handful of reviews for the brace, the majority negative.

Similar to Google search, positive reviews on Amazon can push a product high in Amazon’s internal search engine and could trigger an Amazon’s Choice badge -- an endorsement only given to highly rated and well-priced products.

The analysis concludes that hijacking occurs when fraudsters slip through the technology loopholes in the Amazon seller platform. It also notes that review hijackers exploit Amazon’s practice of allowing companies to list variations on their product.

Consumer Reports suggests that buyers can avoid being tricked by simply taking the time to scroll and read the reviews. It is important to ask questions of the seller. Listing pages allow shoppers to ask questions about products.