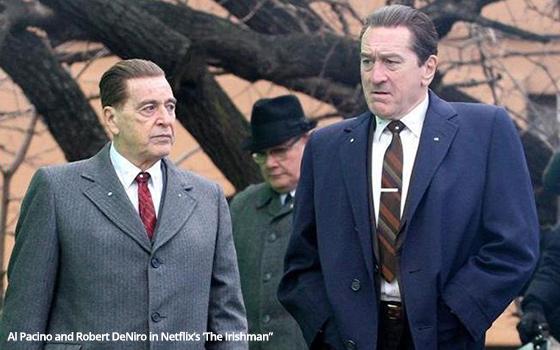 Netflix is giving a select number of theaters an exclusive four-week window of its highly touted movie “The Irishman” a month before the film is streamed on its subscription video-on-demand service.

Netflix said Tuesday that "The Irishman" will open theatrically on November 1.

The film will premiere on its streaming service November 27. The movie stars Robert DeNiro and is directed by Martin Scorsese.

The movie will not have a wide theatrical release because big theater chains, including AMC and Cinemark, have refused to sign up for the one-month exclusive window deal.

Major movie chains want the standard 90-day exclusivity window they get with most major studio releases.

In the past, Netflix has pushed for wide-release movies to be run on the same day and date as its release on its streaming video platform. But theater chains refused -- continually worried about losing box-office revenue because of the shared windows.

Last year, Netflix's “Roma” was released much the same way as “The Irishman” -- a late November theatrical release, followed by a streaming debut three weeks later.

Netflix continues to seek big awards from prestigious award organizations, such as The Academy of Motion Pictures Arts and Sciences -- which helps promote these films and its SVOD service. “Roma” was nominated for a number of Oscars a year ago and won three.

The company will offer the same four-week window for other movies it launches this fall.