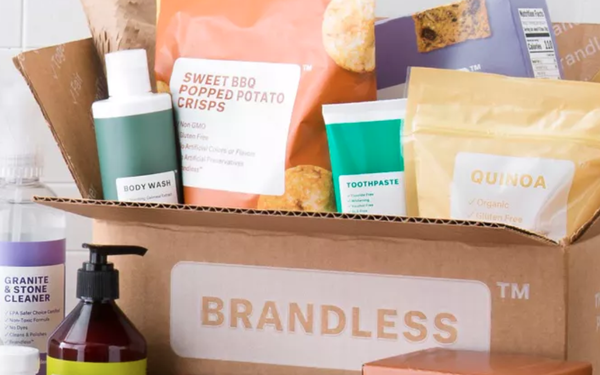 From Amazon to Target and beyond, there seems no end to the proliferation of private-label brands competing for consumer dollars. Throw in services like the online startup Brandless, and it’s virtually a free-for-all for both established and emerging CPG brands.

The most-purchased private label category is food, with 58% of adult shoppers saying they purchased such items in the last 30 days, according to consumer research provider MRI-Simmons.

From a retailer perspective, this is very appealing given the economics of the grocery business. According to CB Insights, while the average profit margin on grocery store goods is about 1.3%, retailers earn 25% to 30% higher gross margins on private labels compared to manufacturer brands.

Citing one example, CB Insights notes how Kroger has long used shopper analytics to guide investments in its own manufacturing facilities and now has a portfolio of over 40 plants processing everything from Big K Cola to spaghetti sauce. Kroger’s Our Brands line comprised nearly 30% of the company’s unit sales as of March 2018, the research firm says.

In the food and beverage space, purchasing private-label products is the No. 1 money-saving tactic among adult shoppers across all income segments, according to a report from IRI for the first quarter of 2019. That tops trying new, lower-priced brands; visiting multiple retailers; downloading coupons from a retailer/manufacturer website and comparing prices on area retailers’ websites. Those money-saving tactics appear in the exact same order when it comes to the purchase of private-label non-food items, IRI says in a separate report.

These insights have not been lost on Target, which generated headlines this month when it announced a major expansion of its private-label offerings. In addition to the youth-oriented, non-edibles branded More Than Magic line (everything from sportswear to electronics and stationery), Target unveiled plans for its own food and beverages under the Good and Gather tag.

“We know that food and beverage is a big reason our guests like shopping at Target, since nearly three quarters of our baskets have at least one food item in them,” Executive Vice President and Chief Merchandising Officer Mark Tritton said while explaining the company’s second-quarter 2019 earnings. “And driven by the improvements we have implemented over the last two years, we have been seeing consistent growth and market share gains in food and beverage for well over a year.”

While Target is aiming to stock some 2,000 private-label items within a year, Amazon Basics is already there and then some, with more than three times as many items, according to data company ScrapeHero. Even though Amazon’s aggressive embrace of its own products -- particularly as regards to which brands show up in on-site search results -- has angered many of its longtime brand partners, the digital behemoth continues to plunge full-speed ahead.

Then there is Brandless, the online startup that sells food and personal care products, (many priced at $3), which clearly has Amazon in its sights. Launched in July of 2017, Brandless this month landed $240 million in a funding round led by SoftBank Vision Fund. It represents SoftBank’s second large ecommerce investment in the U.S. (sports-apparel company Fanatics was the first).

Still, according to MRI-Simmons, younger shoppers are the most skeptical of private-label offerings. Those in the 18-34 cohort are more likely than all adult shoppers to agree that private label products are less trustworthy than name brands and that they feel “cheap” when they buy them.