Can Rental Save A Retail Icon? 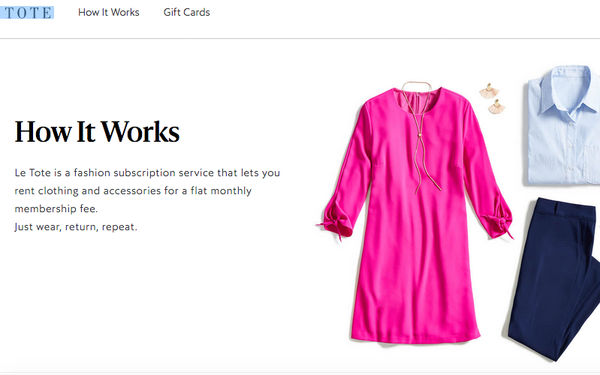 Lord & Taylor is getting swept up into a strange D2C deal, and I need a minute. In case you missed it, the news is that Le Tote, a fashion rental company, is buying what’s left of the retailer from Hudson’s Bay Corp. for $100 million.

What’s not news, of course, is the long, slow decline of Lord & Taylor. Lamenting lost retail icons of New York City is trite, I know. As a reporter covering retail, I work on Death Row.

And as a former New Yorker, I am well aware that I sound like nothing but a nostalgic old lady. I have dim memories of being schlepped through stores like B. Altman and Gimbels, followed by fortification at Horn & Hardart -- or (on the happiest days) by ice cream at Schrafft’s.

I get it. I’m old. And I have -- mostly -- cleared out those retail memories for the new reality. I buy virtually all my clothes online.

Besides, the moment to wax nostalgic about L&T is past. Not only did the Fifth Avenue building get sold to WeWork back in 2017, it’s already changing again. Amazon is now said to be exploring a lease for up to 12 floors of the building.

I’m holding out hope that this deal takes Lord & Taylor off life support. I guess that proves that a) “Hope the old girl hangs on a little longer” is something we should all get used to saying more once we cross north of 50; and b) I really am a fan of digital disruptors, and want to believe they can build a better shopping experience.

Neil Saunders, managing director of Global Data Retailer and a prolific commenter on how the world shops, sounds like he’s sizing the Le Tote deal up in much the same way.

He says in an email to D2C FYI that first, the sale “underlines how much the value of Lord & Taylor has eroded over the past few years.” Second, it also make clear “that there was very little credible interest in the firm from other traditional retailers or the private equity segment. Both of these facts suggest that the company's business model is pretty broken.”

He’s right, of course. I may say I care about L&T but I haven’t actually bought anything there in decades. (I’m recalling a pair of platform flip-flops, circa the first Clinton administration.) And while I may have stood in line on a December evening to look at those beautiful Christmas windows, everything else about it seemed dusty and out-of-date.

Can Le Tote fix that? “By virtue of being a rental company, the answer is absolutely not,” Saunders says. “Rental is a fast-growing part of the market, but it is not a fix for all ills.”

But he thinks Le Tote’s plan to localize assortments is sensible. “And having a rental service as part of the offer will build some interest. Focusing on smaller, more personalized stores is viable if executed properly.”

But he’s as skeptical as I am about the ultimate fix. The purchase doesn’t -- at least, not yet -- answer the most important question: What does Lord & Taylor stand for? “There were no compelling answers under HBC, and any new owner will have to correct that if it is to save the company.”

d2c, fashion, online, retail
3 comments about "Can Rental Save A Retail Icon?".
Check to receive email when comments are posted.
Read more comments >
Next story loading