Trump Vs. Messing: All-New Battle Of The Network Stars! 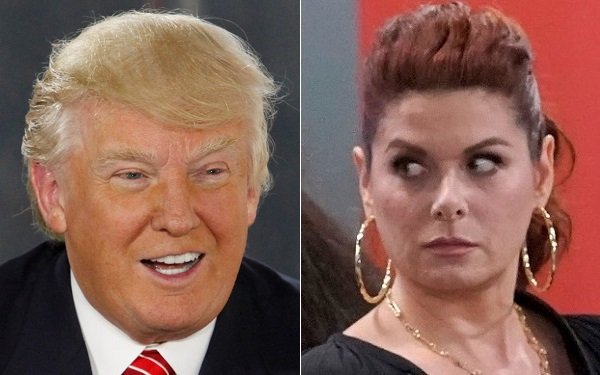 What if past presidents had had Twitter feuds with other celebrities?

Who would they have feuded with, if the social media means had existed during their administrations? Or would they have simply turned the other cheek and otherwise resisted engaging in tweet retaliations?

Questions like these come to mind whenever President Trump launches another tweet attack from the Oval Office (or the presidential master suite in the wee hours of the morning) against some other personage in the public eye.

Most recently, it was Debra Messing, kooky comic actress and co-star of “Will & Grace” on NBC who Trump accuses of once liking him, but now does not. His take on this seemed to be: She complains about him now, but back in 2003 or 2004 (it is unclear which), she couldn't wait to congratulate him about “The Apprentice” on NBC. Ergo, here in the present day, she is a hypocrite.

The fact that the President of the United States obsesses about this stuff is one of those things that lead so many people to wonder whether President Trump is unglued. In addition to the above questions, it is possible to ask oneself: Why is the President up at all hours tweeting? Or more to the point: Is his personal physician at all concerned about his erratic sleep patterns?

According to various trade-press stories, Trump’s recent fixation on Debra Messing has to do with her attempts to make her own self-styled contributions to the more or less continuous chorus of Trump critics who now seek to embarrass or expose those who conduct business with him or contribute to his campaigns.

Specifically, she issued her own tweet (or series of them) demanding that the names of everyone attending a Trump campaign fundraiser in Beverly Hills be released to the public -- after which those who detest Trump were encouraged to boycott the businesses these people run or work for, and snub them personally (or some such).

This idea -- of releasing a list of people into the public realm in the hopes of shaming them and inducing others to have little or nothing to do with them -- revived memories for some of the 1950s Red Scare and the blacklists that ruined the lives of many who lived and worked in the Hollywood community.

Among those who took issue with Messing's campaign for the release of this donors’ list was Whoopi Goldberg, who debated the subject on “The View” with co-panelists Joy Behar and Sunny Hostin. Goldberg felt that it smacked of blacklisting.

As for Trump, he issued a series of tweets, one of which might represent a “first” in the annals of presidential history -- a U.S. president invoking the subject of the network upfronts in an official communication (if that is what we are to consider President Trump’s tweets).

“I have not forgotten that when it was announced that I was going to do ‘The Apprentice,’ and when it then became a big hit, helping NBC’s failed lineup greatly, @DebraMessing came up to me at an Upfront & profusely thanked me, even calling me 'Sir' How times have changed,” tweeted the President of the United States and one-time network star.

It is the casual use of the word “Upfront” in this tweet that is of particular interest because it implies that President Trump believes that the upfronts -- these annual events of interest primarily to the TV and advertising industries -- are so widely known generally that he can casually use the word in a tweet and everyone who reads it will know what he is referring to.

The reality is: Most people not affiliated with either of these industries would likely have no idea what he is talking about.

Trump also took up the blacklist theme in his anti-Messing tweets. “Bad ‘actress’ Debra The Mess Messing is in hot water,” he wrote on Twitter, according to an account on the Hollywood Reporter Web site. “She wants to create a ‘Blacklist’ of Trump supporters, & is being accused of McCarthyism. Is also being accused of being a Racist because of the terrible things she said about blacks and mental illness. [She reportedly revealed elsewhere on social media recently that she agreed with someone who posted the belief that African-Americans who support Trump are mentally ill.]

“If Roseanne Barr said what she did,” the President continued, “even being on a much higher rated show, she would have been thrown off television. Will Fake News NBC allow a McCarthy style Racist to continue? ABC fired Roseanne. Watch the double standard!”

Ratings, upfronts, sitcoms and their outspoken stars are all of keen interest to our current President. The next thing you know, he will be reimagining his annual State of the Union address as The Trump Upfront.