NFL, Reddit Partner On 'Ask Me Anything' Series, Advertising 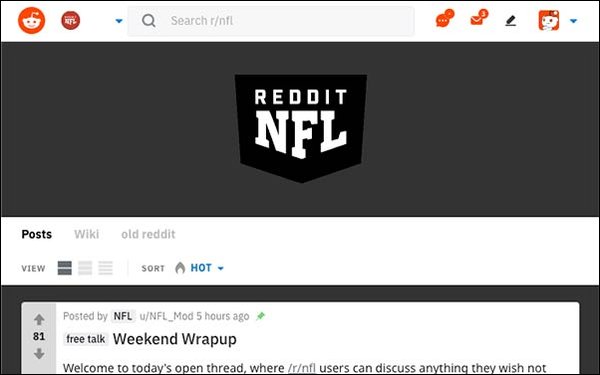 As the National Football League opens its 2019 season, it has announced a new partnership with Reddit Inc. that will include a series of “Ask Me Anything,” or AMA, discussions, in addition to content and advertising.

The series will feature current and former NFL players, league executives, team personnel and famous fans, among others, The Wall Street Journal reports. In each segment, the featured guests will take questions from the audience.

The NFL plans to run a minimum of one AMA a month during the season. It anticipates that this number could grow.

Reddit users are free to ask questions around any topic they choose, which the WSJ notes could include player safety, how the league addresses off-field player behavior and social justice.

“Generally, the participants will be representing themselves, first and foremost, and not necessarily the views of the NFL,” Blake Stuchin, vice president of digital media business development for the NFL, told the WSJ.

“But the bulk of the conversations we have seen on Reddit — and the bulk of what people generally want to talk about — is core football. Anything beyond that, it’s really no different than the comments we see on any user-generated or social platform.”

The sports league will feature the AMA guests in other digital video series that will be distributed across Reddit and on the NFL’s social media, website and NFL Network. Reddit, the WSJ reports, will be able to use the series as a marketing tool of sorts. Its content is distributed across the NFL’s platforms to potentially new users.

The article notes that per 2018 Comscore data, 17% of Reddit users don’t use Facebook, 28% don’t use Twitter, 33% don’t use Instagram and 43% don’t use Snapchat, opening the NFL up to a new group of social users untapped by other platforms.

Reddit reports 8.8 million monthly visitors to its football communities, with the NFL forum claiming 1.4 million members. Each team also has at least one dedicated Reddit forum, per the WSJ.