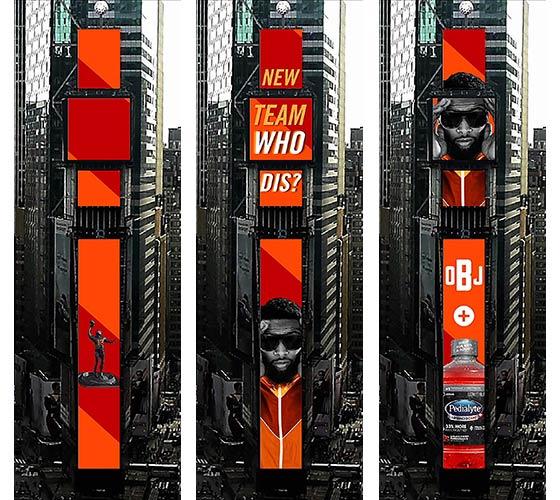 Cleveland Browns athletes Baker Mayfield and Odell Beckham Jr. are each starring in advertising campaigns conveniently timed to the start of the NFL season.

Abbott is curiously aging up its Pedialyte brand by announcing Odell Beckham Jr. as the brand's new creative director and ambassador.

This partnership officially marks Pedialyte’s entrance into the sports hydration category under the "advanced care" messaging in an attempt to grab market share from Gatorade and its wellness rivals. In fact, market defined as adult usage now accounts for more than 50% of overall Pedialyte sales, with sports and fitness being the second highest usage.

Beckham's first campaign, developed with Leo Burnett and MSL Chicago, debuts with out-of-home creative appearing in Times Square. The message plays off his former team, the New York Giants, by asking "Who Dis?" above a giant image of Beckham. Another picture shows Beckham's glamorous headshot, initials and Pedialyte's new adult packaging. Additional content marketing and social media support will roll out through the 2020 season. Beckham will also help to develop new adult-specific products.

Concurrently, Beckham's teammate Baker Mayfield is featured in what Progressive calls a "holistic marketing partnership" to introduce a content-rich and episodic approach that’s more characteristic of today’s network shows than ads in the insurance space.

The season-long series doesn’t follow the traditional model of making a group of ads and then releasing them in a single batch. Instead, this “season within a season” episodic content campaign will unfold gradually, almost as a traditional storyline on TV would, to provide light-hearted moments with the quarterback and his wife, Emily Wilkinson.

The “At Home With Baker Mayfield” series, developed with Arnold Worldwide, debuts with spots ranging from 15, 19, 23 and 30 seconds on both national television and digital channels, with two new cuts rotating in every two weeks for the duration of the season. One clip shows the duo living in the stadium, complete with typical household frustrations like figuring out which circuit contains the blown fuse. Hint: It's not the scoreboard.

Mayfield was the perfect ambassador, as he is a real-life client as well as hometown hero due to Progressive being one of the leading businesses in the Cleveland metro area (coincidentally headquartered in Mayfield, Ohio.)