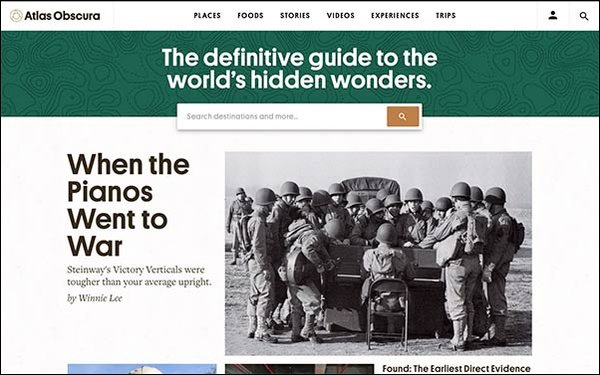 Travel online magazine Atlas Obscura has raised $20 million in a Series B funding round led by Airbnb, with plans to grow its trips, experiences and events businesses.

The investment is also the beginning of a partnership: Airbnb will offer the ability to book Atlas Obscura trips and local events through Airbnb’s site and app. The company will also take a cut of the business.

Atlas Obscura plans to use the investment to expand its Trips and Experiences offerings, according to The Wall Street Journal, which first reported the news. This division makes up more than half of Atlas Obscura’s business.

The site offers about 100 Experiences and Trips in over 10 countries, with prices ranging from $25 to $7,000. They range from “Vietnam’s Most Delicious Dishes” in Hanoi to “The Chicago Underground Scavenger Hunt” in Illinois.

Atlas Obscura hosts about 500 events a year in seven cities in the U.S., according to WSJ. With the new monies, the company plans to offer hundreds of events each month in cities across the U.S. and overseas.

Airbnb offers 40,000 of its own experiences and activities in more than 1,000 cities today. It also created a print magazine in 2017, in partnership with Hearst.