Debate On ABC Was Endurance Contest For Candidates, Viewers 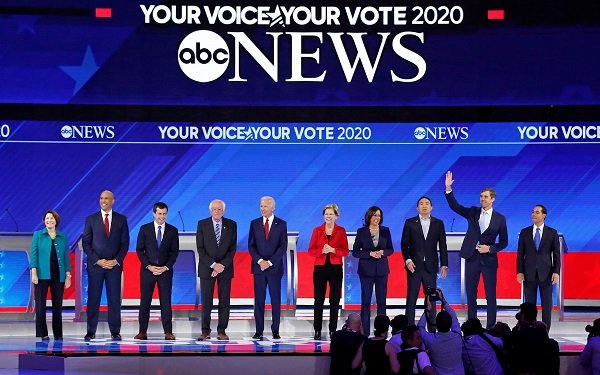 Mirror, mirror, on the wall, who is the cleverest of them all?

This seemed to be a question on the minds of at least some of the candidates at Thursday’s Democratic debate in Houston as they came onstage armed with an array of colorful and pithy phrases that they evidently hoped would be favorably quoted in the post-debate media frenzy.

“Trump is running our country like a game show,” said Minnesota Sen. Amy Klobuchar, who should have considered changing that to “reality show,” since Donald Trump is not associated with any TV game shows.

Klobuchar was the one candidate who took up the opportunity afforded by the debate’s location to utter the immortal phrase “Houston, we have a problem.” The other debaters probably had that one in their pockets too, but she beat them to it.

California Sen. Kamala Harris trotted out the old cliché about “the man behind the curtain” in “The Wizard of Oz.” “Donald Trump in office, on trade policy, you know, he reminds me of that guy in ‘The Wizard of Oz’,” she said. “You know, when you pull back the curtain, it’s a really small dude?”

Certainly, attacks on President Trump came frequently during the debate, which ran for just under three hours on ABC.

The debate was the third in this summer’s series of Democratic face-offs. It was a discount debate -- 50% off! -- as only 10 candidates participated on just one evening (down from the two-night, 20-participant spectacles seen earlier this year).

Harris accused Trump of telling 12,000 lies in his two-and-a-half years in office (has someone actually been counting them?) and then she invited him to “go back to watching Fox News.”

That last phrase was a divisive remark that played like Hillary Clinton’s infamous “deplorables” remark that probably contributed to her losing the 2016 election. Generally speaking, Harris came across as too angry in Thursday’s debate. It was not a good night for her.

It was not a good night for former Texas Rep. Beto O’Rourke either. We can all agree that the problem of access to military-grade weapons should be a high priority, but O’Rourke’s graphic descriptions of the damage that these weapons can wreak on the human body were excessive and grotesque. He came across, again, like a candidate whose campaign is desperate and floundering. You could practically see the flop sweat Thursday night.

Perhaps the candidate who fared worst was Julian Castro. His evidently premeditated attack on former Vice President Biden, in which Castro questioned this 76-year-old man’s cognitive abilities, was almost universally panned in the aftermath of the debate.

The attack was mean. At least one commentator -- former Chicago Mayor Rahm Emanuel, on ABC after the debate, felt the remarks “disqualified” Castro from the campaign. “He could have made the point … he had a legitimate point, but it’s a disqualifier the way he handled it,” Emanuel said.

While some have questioned Biden’s cognitive abilities, it is also true that the three Democratic frontrunners are 70 or over -- Biden, Bernie Sanders, 78, and Elizabeth Warren, 70.

For his part, Biden did come across many times Thursday night as rambling and vaguely out of focus, if not out of touch. And yet, he can still be considered the winner of the debate. Throughout the debate, he stayed on-message, which seemed to be: I’m the guy with the resumé and the experience.

At least one of his remarks raised eyebrows, though. Toward the end of the debate, he did ramble on for a substantial length of time (far exceeding the time allowed under the debate rules) in which he issued a quaint (if not bizarre) prescription for improving the literacy of children.

“Social workers help parents deal with how to raise their children,” Biden said. “It’s not that they don’t want to help, they don’t know what to play, the radio, make sure the television -- excuse me, make sure you have the record player on at night, the -- make sure that kids hear words. …”

Well, if Joe’s energy was beginning to flag by this point, then that’s understandable. These marathon debates are an endurance contest for the debaters, but also for those of us at home who are determined to watch them from beginning to end.

Between the unrealistic promises, the falsehoods, the name-calling and the ceaseless complaints about the horrors of life in the United States of America, this one in particular was one tough slog.