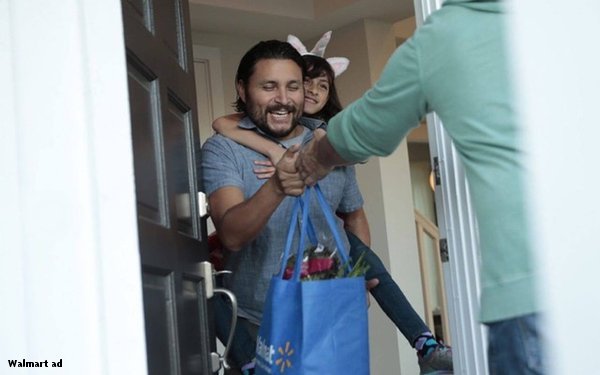 As Amazon, Walmart and Target spar with conventional grocers in the great land grab of e-groceries, a new report shows that online grocery spending in the U.S. is snowballing, up 15% this year.

Brick Meets Click’s just-released analysis of the ecommerce market finds that online spending now accounts for 6.3% of all grocery spend. That’s up from 5.5% last year, says David Bishop, partner. Total grocery spending in the U.S. amounts to about $840 billion each year.

Amazon’s food efforts get lots of attention. But Bishop says it’s companies like Walmart and Kroger that are doing really well, “while Amazon is doing just okay. Amazon is still just learning the grocery business, and it still isn’t associated with fresh foods in consumers’ minds.”

Brick Meets Click, a consulting and research company based in Barrington, Illinois, says 25% of all U.S. households have bought groceries online in the last month. The average value of orders has risen 6%, to $70. When only analyzing home delivery and pickup orders (and excluding those that are shipped) average order value is much higher, climbing 13% to more than $100.

The study says retailers keep getting better. For example, 81% of respondents say they are likely to use a specific service again, up from 69% last year. And 90% say they were able to find everything they wanted, up 12 percentage points. The research is based on a sample of almost 2,500 U.S. shoppers.

Another industry report, this one from Inmar Analytics, finds that conventional grocers are on the losing end of this online growth. The Winston-Salem, N.C.-based research company says that while the traditional grocery channel still has the largest share, it continues to shrink, and is now just 44%, down 1.7%. (In 1988, grocery stores had a 90% share.)