How MedAnswers Is Bettering The Baby Odds 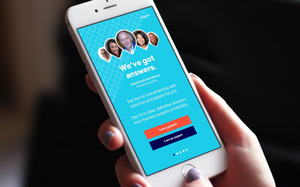 Alice Crisci, founder and CEO of MedAnswers, had all kinds of motivation for launching FertilityAnswers. Diagnosed with cancer at 31, she had five days to figure out how to preserve her fertility -- and had to pay for the procedures herself. And as someone who conceived and had a child through in vitro fertilization, she is well acquainted with the high cost and heartbreak of IVF.

Crisci, inspired by the overwhelming amount of inaccurate medical information she encountered on social media, cites studies that 90% of young adults blindly trust unverified scientific information they read online. The less accurate it is, the more likely they are to share it, studies show.

“At one point, I was watching a Facebook group of about 480 women, and they were debating research that been published in Nature,” she says. “It’s the world’s most respected science journal, and here they were, questioning the validity of the most valid publication out there. They don’t know who to trust. That level of misinformation is a scary problem, and it’s getting worse.”

So she started MedAnswers and its Fertility Awareness app. Users ask a question and anonymously complete a health profile. FertilityAwareness’ experts -- so far, some 200 board-certified fertility specialists, embryologists, geneticists and even legal experts -- weigh in, reaching a consensus about the best answer.

So far, the app has answered about 7,000 questions. And while a percentage -- perhaps 30%, she says -- are repetitive and can eventually be answered via machine learning, “fertility is surprisingly unique and personal. One semen analysis can be very different than another, and different labs report results in different ways.”

The experts aren’t paid, she says, but participate, in part, to cut down on the time they’re already spending to produce content for various social media. “This is a more efficient way for them to reach potential patients,” she says.

The company, which just announced that it has raised a $5 million round of funding, intends to make money through lead generation, including clinical trials and IVF treatment centers around the world. “The products pay us, not the patients. Whatever solution, we match them to the right IVF clinic. If they are going to spend $15,000 on an IVF cycle, it just makes sense to talk to multiple experts -- not just one clinic -- to make sure they are using the best approach.”

Sometimes it makes sense for users to travel to far-off clinics, including in Spain, India and Mexico, for better and more affordable options.

With a median age of 27, users typically have been trying to get pregnant for at least three years. The vast majority -- about 85% -- are overweight, and many have polycystic ovary syndrome. “Many of them have been shamed by doctors,” Crisci tells D2C FYI.

The aim is to simplify the vast amount of information available. “We want to eliminate their having to do the research, match them with the best solutions and move them on the path to parenthood,” says Crisci. “We want to be the epicenter of their treatment.”