New For Fall: Court TV Is In Session Mondays On CBS, NBC 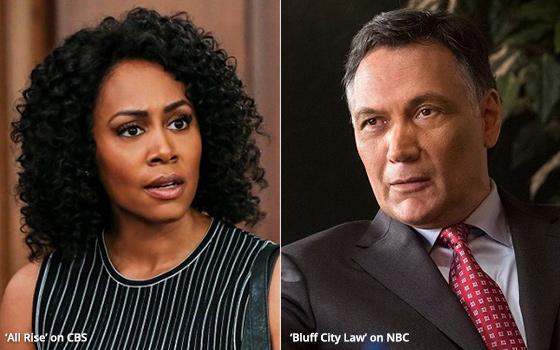 If any researcher or historian of television has ever toted up the number of hours that TV has devoted to the inside of courtrooms since the start of television, then it must be a very high number indeed.

Even today, just counting the daytime judge shows alone for a year would yield an astronomical figure. And then, when you add in all of the courtroom dramas (and a smattering of comedies) that have aired on TV for decade upon decade, then courtrooms could very well emerge as the most-visited location on television, period.

With this phenomenon in mind, it might be reasonable to wonder whether TV has reached the point where there is nothing left to say any more about courts and lawyers. The truth is, there really isn’t. And yet, that is not stopping the networks from giving us new courtroom dramas every fall season.

This year, two of them are on the same evening -- Monday nights -- on CBS and NBC, although the two are not competing in the same time period.

On CBS, it’s “All Rise,” about a new Superior Court judge in L.A., airing Monday nights at 9. On NBC, it’s “Bluff City Law,” starring Jimmy Smits (photo, above right) as a celebrated attorney in Memphis, Tennessee. This one will air Monday nights at 10.

Both premiere on the same night, next Monday.

They are not much alike either, except that both do what so many courtroom dramas have done before them -- which is, portray courtroom goings-on and a legal system in general that are wholly divorced from reality.

That’s not even a criticism either, because if our fictional courtroom dramas on TV portrayed real-life courtrooms, few people would watch them because real courtrooms are not nearly as dramatic. In addition, attorneys and judges on the TV shows repeatedly engage in courtroom histrionics that would never be allowed in real-life courts.

In the premiere episode of “Bluff City Law,” for example, a case is won on one such display in which a lawyer, this show’s main character, elicits testimony from a witness that should have either been struck from the record, or resulted in the judge declaring a mistrial. Neither of those results would have served the plot, however.

“Bluff City Law” is about this famous Memphis attorney (Smits) and his daughter (the main character referenced above), who works with him in his famous firm. The two have a history of contention, but they are brought together in Episode One when her mother (his wife) dies.

The lawyer daughter is played by Caitlin McGee. Although Smits is the show’s ostensible star, the show is all about her. In or out of the courtroom, she is a drama queen who even manages to work her own mother’s death into a summation she delivers to a jury in a civil lawsuit.

“Bluff City Law” is clichéd, its characters are not particularly likable, and the legal strategies employed in the first episode are laughable. If this show has anything going for it, it is in its choice of location. At least in choosing Memphis, NBC recognized that there are places that Americans live other than New York, L.A. and Chicago.

Meanwhile, “All Rise” sticks to L.A. for its courtroom drama. This show revolves around a new judge in L.A.’s Superior Court system, one Lola Carmichael (played by Simone Missick, pictured above).

She is a former assistant district attorney who is newly appointed (or elected) to this judicial post. In the series premiere, we see her taking up her new job for the first time. On the way to her new office, she engages in repartee with co-workers and colleagues that is so bright and airy that you half expect Katharine Hepburn to walk in suddenly from a 1940s movie.

This is the CBS way. Everyone is excellent at their jobs, tops in their classes, and superior to all others both ethically and morally. Their dialogue sparkles and their eyes twinkle.

Naturally, Judge Carmichael has her own take on how the justice system should work, and she almost immediately crosses swords with her supervisor, played by Marg Helgenberger in her return to CBS.

What’s the verdict? When watching “All Rise,” it is possible to put one’s reservations aside about this show’s lack of realism and simply enjoy it.