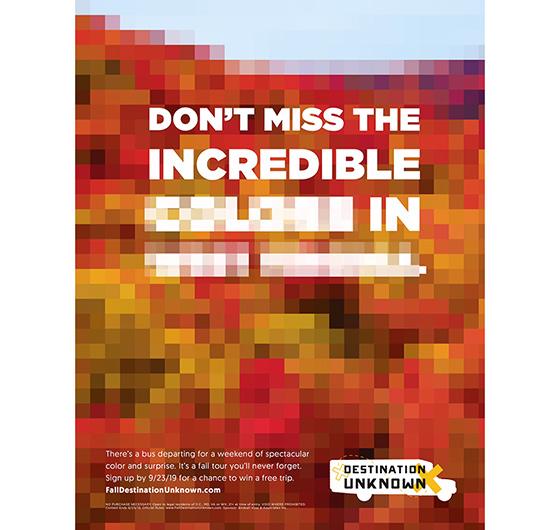 Tree leaves apparently transforming into abundant fall colors are one of the few clues behind an unnamed destination's tourism campaign.

The aptly titled "Destination Unknown" campaign, developed with agency BVK and an unnamed tourism group, is called the first campaign to advertise a region without disclosing the location. The creative features blurry images of fall tree leaves alongside messages like "Don't Miss the Incredible.....In..."

"Conventional tourism marketing can be predictable at times, so we wanted to do something completely different and unexpected for the category and the audience," explains Brian Ganther, executive creative director, BVK. "By building the buzz and intrigue with a mystery destination, we’re hoping that people will be curious and follow along with the journey in the media and on social."

Among the few other clues to the destination, the campaign creative is aimed at "adventurous" travelers, who are prompted to visit FallDestinationUnknown.com to gain background information and for a chance to claim a seat on the "Destination Unknown" bus, leaving from Washington, DC on the morning of Oct. 5.

"We’re looking for open-minded and spontaneous people who are willing to experience a destination they may not have considered before -- without even knowing what it is," says Ganther.

Obviously, another clue is that the destination is within driving distance of DC. The agency selected that market for its media buy because of its proximity, says Ganther. The messaging will appear in transit ads, radio, targeted digital and social ads as well as local influencer engagement.

"Washington D.C. offers an intellectually curious population, and this campaign definitely taps into that," says Ganther. Plus, entrants must be from the greater DC area, specifically, District of Columbia, Maryland or Virginia, to enter or win a seat on the bus.

The campaign will shift into its second phase after the location is announced Oct. 5, says Gather. "Once the destination is revealed and we’ve shown what the experience is like, we know people will be inspired to take a trip for themselves."