New For Fall: Psychopaths On Parade In 'Evil,' 'Prodigal Son' 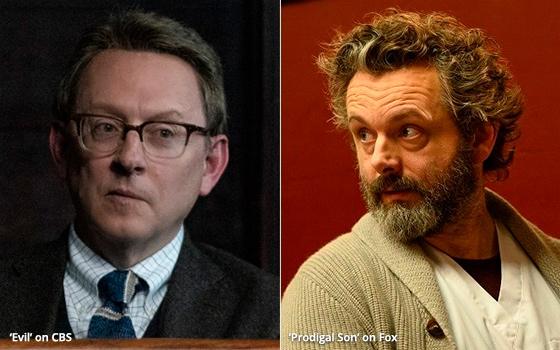 It is apparently not enough for murders to occur one at a time on our blood-splattered drama shows.

Now, entire families must fall victim to TV’s parade of prime-time psychopaths. By sheer coincidence, this is what happens in the premiere episodes of two different network dramas making their debuts next week.

In the new Fox drama “Prodigal Son,” premiering next Monday, it is a wealthy Manhattan family of four who have all been tortured and murdered while seated at the dinner table (where they are discovered still sitting up vacantly facing their unfinished meals). The person who did this also populated the insides of their corpses with poisonous snakes. The TV Blog believes this last detail represents a television first.

In the new CBS drama “Evil,” it is not one but three entire families who fall victim to a serial killer’s knife.

Yesterday’s TV Blog asked whether anyone has ever toted up the number of hours of courtroom shows that have been seen throughout the history of television.

A similar question might be asked about tallying up the number of serial killers and their victims who have been seen on CBS since the advent of the first “CSI” in 2000. CBS has an evident love affair with these serial-killer storylines. The death toll must be staggering by now.

Another coincidence binds these two violent TV shows, besides the massacres of families seen in both of them. They both feature characters who suffer from nightmares, which in both shows are categorized as “night terrors.”

In “Prodigal Son,” the nightmares are disrupting the sleep patterns of a young man named Malcolm Bright (played by Tom Payne). It is possible this show’s writers named him “Bright” because he is really, really smart. He is so bright that he would seem to belong more properly on CBS, where every sleuth is an eccentric genius.

Mr. Bright is the show’s titular prodigal son. His father is a serial killer who was put away when Malcolm was a boy. The son’s night terrors apparently stem from growing up in the household of a serial killer.

Here in the present day, this serial killer (played by Michael Sheen, pictured above right), has telephone privileges in prison that are sufficient for him to hector his son with frequent phone calls offering his help in murder cases his son is investigating. Malcolm is not a cop, but the NYPD enlists his help as a profiler/consultant whenever they need an expert on psychopathic behavior.

Thus, you have a show in which the dad will remind you of Hannibal Lecter, and the relationship between father and son might remind you of “Dexter,” only in this case, the father is the serial killer, not the son. These are not be construed as reasons to watch “Prodigal Son,” however. It is a sad, violent show that benefits no one.

However, it is a masterpiece compared to “Evil,” which so far emerges as the worst new network show of the fall season. And even though the TV Blog has not yet seen every new show the networks will introduce in the next few weeks, another show would have to be almost indescribably awful to surpass “Evil” as the season’s worst.

Speaking of television firsts, this show actually has a demon urinating in the corner of a woman’s bedroom to make some kind of point about the lengths that he will go to demonstrate his capacity for evil. Or maybe he just really had to go to the bathroom and couldn’t find it in the dark.

The premiere episode of “Evil” has two scenes in which the woman -- another of TV’s endless supply of brilliant but flawed forensic/psychologic specialists -- has nighttime encounters with this evidently animated emissary named George from the Satanic underworld. The scenes are so ridiculous, and also violent, that you might not know whether to laugh or be sick.

“Evil” concerns itself with a team of investigators called “assessors” who work for the Vatican. In this capacity, they investigate crimes and other events in which paranormal, Satanic or just miraculous elements are at work.

In Episode One, they recruit this forensic specialist to join their team as its resident skeptic. Their arch-foe is a psychopath (played by Michael Emerson, above left) who recruits other psychopaths to commit horrible crimes.

If you watch “Evil,” you might consider this show a horrible crime as well. And you might wonder what possessed CBS to pick up this show in the first place.