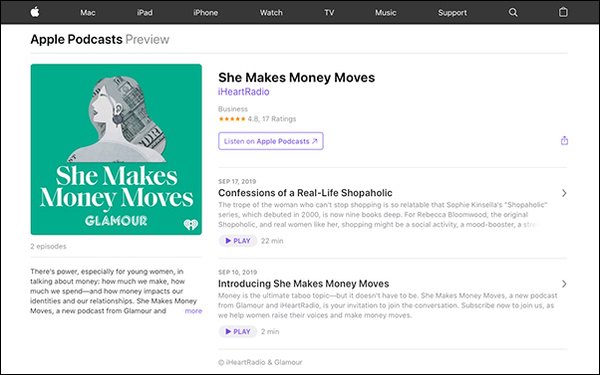 today launched its second podcast with iHeartMedia to tell stories of women and their relationship with money.

“She Makes Money Moves” will be hosted by Glamour editor-in-chief Samantha Barry.

“There's power, especially for young women, in talking about money: How much we make, how much we spend — and how money impacts our identities and our relationships,” Barry stated. “There's incredible discomfort around these topics, and here at Glamour, we're committed to shedding the taboo and inviting women to join in."

The 16-episode podcast features a different topic each week, from student-loan debt to pyramid schemes. It will feature discussions from a variety of finance experts, including author, financial reporter and popular TV personality Farnoosh Torabi, as well as Tiffany Aliche, Nicole Lapin, Shannon McLay and Stefanie O’Connell.

Episode 1 explores the life of a compulsive shopper. New episodes will drop every Tuesday.

Separately, The New York Times’ daily podcast has reached 1 billion downloads since its debut in early 2017, the publisher announced today.

“On any given morning, the show is now downloaded 2 million times, making it the most popular news podcast in the country,” they stated.