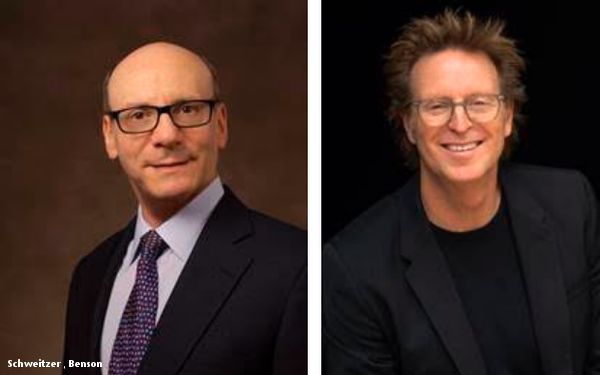 George Schweitzer, who has been a senior marketing executive at the company since 1994, becomes chairman of CBS Marketing.

Benson will be responsible for all brand marketing activities including advertising, promotion, creative, experiential marketing and events across CBS Entertainment, CBS News and CBS Sports.

He comes to CBS from Amazon, as its top senior marketing executive for premium streaming platform Amazon Prime Video. Under his leadership, he oversaw marketing for a number of original TV series including “The Marvelous Mrs. Maisel,” “Tom Clancy's Jack Ryan,” “The Man in the High Castle,” “Homecoming,” and “Thursday Night Football.”

Previously, Benson was chief creative officer for the Time Warner Global Media Group,. Previously, he worked for over 12 years at The Walt Disney Company as executive vice president of marketing for the ABC Entertainment Group.

Benson began his TV career working at CBS TV stations in various positions. He then worked at VH1/MTV Networks, serving as senior vice president, of promotion and program planning.

Schweitzer was first hired at CBS in 1972 as a communications executive, moving briefly to Young & Rubicam in 1987 as vp/director of corporate relations, before returning to CBS in 1988.

Both Benson and Schweitzer will report to David Nevins, chief creative officer for CBS Corp.

CBS and Viacom expect to close their all-stock merger -- which was announced in August -- by the end of this year. The combined revenue of both companies will be more than $28 billion a year.

At the time of the deal, CBS had a market value of $18 billion, while Viacom had about $11.7 billion.
m&a, management, television
Next story loading