New For Fall: 'Emergence' Has A Great Story Well Told 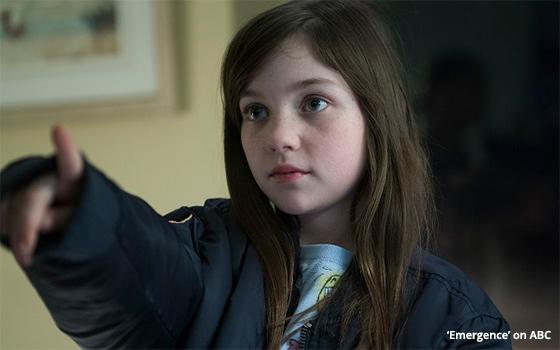 Allison Tolman played a deputy sheriff in a small town in the first season of “Fargo” on FX in 2014, and now she’s playing a police chief in a small town on the east end of Long Island in “Emergence” on ABC.

In some ways, they are the same role. Her sheriff character in “Fargo” and her police chief character in “Emergence” are both enmeshed in an effort aimed at unravelling a mystery like no other that has ever come to each of their small towns.

In “Fargo,” Tolman had a very crafty and sadistic hit man to contend with, played by Billy Bob Thornton. In “Emergence,” Tolman’s character has a much larger conspiracy on her hands -- namely, figuring out how a plane came to crash on a beach in her community, apparently killing everyone on board except for an 8-year-old girl, after which the wreckage and any sign of the accident disappeared overnight.

The only person who may (or may not) have been involved in the crash who is still around is this little girl (played by Alexa Swinton, pictured above). The child has no idea who she is, or where she came from -- or so it seems.

Mysterious characters keep showing up who want to take custody of the girl, but the police chief, aided by various family members, fends them off. At the same time, the mystery over this airplane flight, its origin and its destination deepens by the hour.

And that's the show. Premiering next Tuesday night, “Emergence” is perhaps the most conspicuous of the new shows that ABC will introduce in the next few weeks as the new fall season gets under way.

At the very least, the promos ABC has been running on its own air for “Emergence” since last month seem to outstrip all others, although “Stumptown” and “Mixed-ish” are getting a great deal of promotional attention too.

Based on the premiere episode, which the TV Blog previewed this week, “Emergence” emerges as a very strong new series for ABC. Tolman is great in the lead role, and she gets great support from Clancy Brown (playing her father, a retired firefighter) and Donald Faison as her estranged husband.

The pilot hits no discernible sore points. To be specific, the premiere episode contains none of the gratuitous violence and vulgarity that characterize so many other shows on network television today, including a few that have been reviewed here over the last few days.

“Emergence” has a story to tell, and gives us just enough of its story in Episode One to make us eager to see more.