Esports, Ninja, Twitch, Fortnite. At this point, most people have heard of one of those four words, and have some sense that each is connected to gaming.

Are they all connected to each other? Yes. Ninja plays the global phenomenon free-to-play game Fortnite, which he used to stream on Amazon's streaming platform Twitch (but recently he signed a deal to stream exclusively on Microsoft's Mixer). Many people play Fortnite competitively as an esport, and those competitions, like most esports competitions, are broadcast on Twitch.

If you've read anything about esports in the past year, they have all inevitably mentioned one or more of the following:

Compared to traditional sports, esports viewership in the U.S. will be second only to NFL viewership by 2021.

I've said it before and I will say it again -- when people are discussing esports, they often mention aspects of the gaming world at large that influence the success of esports, not esports itself.

Esports is and should be defined only as: organized video games played competitively in front of a live audience -- whether physically or broadcast live -- for a prize.

Let me explain what I mean.

Twitch, YouTube Gaming, and Mixer are the three largest broadcasting platforms for gaming. Mixer only recently attracted more people to its platform after Ninja signed an exclusive streaming deal with Mixer, bringing his massive audience of millions over from Twitch.

What do people watch on these platforms? Esports? Yes -- but more than that, they watch gaming in general.

NewZoo, a data and analytics company focused exclusively on gaming and esports, has a Game Streaming Tracker that continuously tracks viewing and streaming behavior across Twitch and YouTube. NewZoo notes: “Esports hours consists of content from professionally organized esports competitions and does not include individual (pro-player) streams. This content combined with consumer content makes up the total hours watched.” 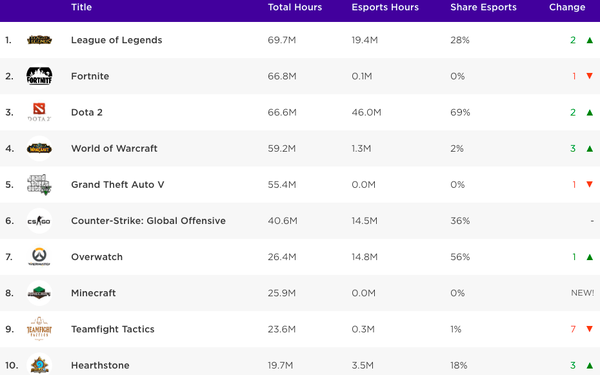 What do I mean by “qualifies as an esport”? All esports are video games, but not all video games are esports.

For example, the popular titles Grand Theft Auto and Minecraft made it into the top 10, sitting at 55.4M and 25.9M hours viewed in August, respectively. However, these games are not played competitively and are not considered esports titles. Does that make their viewership any less of a compelling reason to engage with the gaming world? No.

So what does that tell us? The bulk of time spent watching gaming is not spent watching esports, but rather “casual” or “recreational” gaming with personalities that viewers want to watch.

The viewership of that gaming drives people to watch esports competitions of their favorite games, certainly. Unlike in traditional sports, professional video game players often broadcast themselves practicing their gaming on Twitch or other streaming platforms to interact with their fans and to earn some cash.

Ninja is the perfect example. He is a professional streamer and personality who, until his deal with Mixer, earned $500,000 a month from Twitch simply by way of his monthly $5 subscribers. And Ninja’s streams, which he does almost 24/7, are a great opportunity for brands and advertisers to reach the tough-to-catch 18-24 audience, a demographic that makes up the bulk of gaming viewership. In fact, Ninja just became the first professional gamer to be sponsored by Adidas.

Notice, however, that not once have I called Ninja a professional esports player. Why? Because Ninja has barely ever competed in esports competitions since coming into fame.Throughout his career, he has only earned approximately $250k in esports winnings, compared to the millions that some pro-gamers have won, and now Ninja primarily stands as a personality in gaming.

Ninja did not even qualify for Fortnite's latest esports event, the World Cup, which rewarded Kyle “Bugha” Giersdorf, a 16-year-old from the U.S. who no one had heard of before, with $3mm.

By no means do I mean to discredit or take away from Ninja's wild success. My goal is to point out that technically, Ninja should not be synonymous with esports, as he is a “recreational” gamer, in that the bulk of his broadcasts are about watching him play the game casually, not competitively.

What he can and should be synonymous with, and indicative of, is the amazing draw that the gaming industry has --  esports being its more prominent mainstream facet through its immense news coverage.

If marketers, advertisers, and media providers can realize the power of broadcasting gaming content like Ninja’s that includes -- but is not exclusive to -- esports, they will be able to capitalize on this emerging industry.