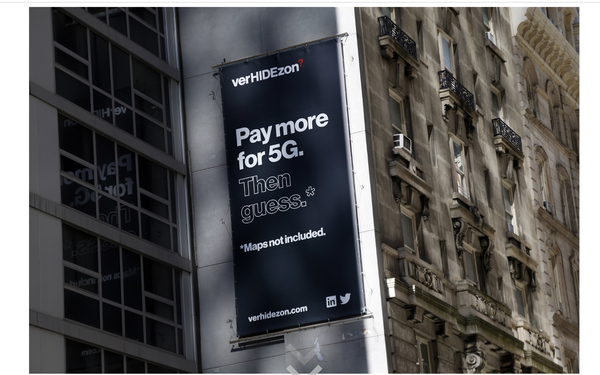 T-Mobile has launched a full frontal attack on Verizon, erecting billboards in New York purportedly sponsored by VerHIDEzon and basically calling Verizon’s planned 5G launch in the city a sham.

Verizon, the nation’s largest cell phone provider, said Wednesday that starting Sept. 26, customers “in parts of New York City will be able to access Verizon’s 5G Ultra Wideband network, bringing the total number of U.S. cities with Verizon 5G mobility service to 11.” It also plans to launch 5G in more than 30 cities by the end of the year.

But T-Mobile, which often lobs grenades against Verizon and AT&T, says Verizon is vague about just how much of New York will be capable of getting the new 5G service, and chided Verizon for not providing a coverage map so customers can see for themselves.

In addition, T-Mobile says Verizon will charge an additional $480 for a family of four to attach itself to 5G service.

“Something had to be done,” tweeted John Legere, T-Mobile’s CEO on Wednesday. “@Verizon’s been talking a big game about 5G, charging more for it and not even giving customers a map to find it. Hopefully all of NYC (and the rest of the country) now realizes @verHIDEzon=Verizon.” He attached a photo of one of the billboards to his tweet.

T-Mobile’s website has a map that shows the scattered areas in six cities, including New York, where it is now offering 5G service. Verizon doesn’t have a map like that -- but 5G coverage by all the carriers is far from complete.

Even given the competition between cell phone services, the package of T-Mobile communiques about Verizon’s service seems  shrill.

The  VerHIDEzon website, presented as if it was written by copywriters from the phony VerHIDEzonf, says at one point, “We pride ourselves on being frustratingly arrogant and non-transparent. It’s the core of our DNA. It’s in our name. It’s in everything we do. We’re VerHIDEzon. Pay More. Then Guess.”

Verizon did not respond to a request for comment.

It said earlier that at launch, Verizon’s 5G will be available in parts of four of the city’s five boroughs. But as the tech website 9to5Mac points out, “The range is extremely low, typically limited to a block or so, sometimes even less.” However, that’s true for all of the carriers' 5G service at this point.

Apple, which recently unveiled new IPhones, said it will wait until next year to release a 5G model, supposing by then that the major carriers’ 5G buildout will be broad enough to be useful to many consumers.