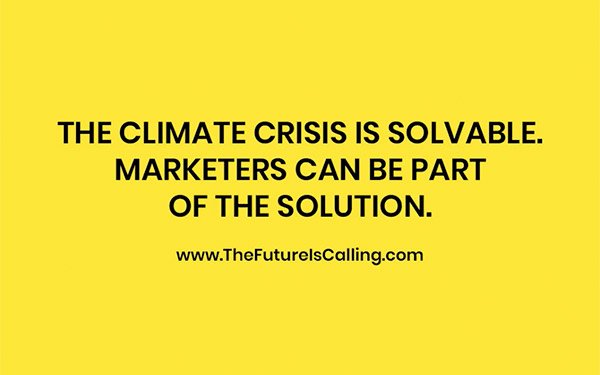 Under the banner “The Future is Calling” they are taking a united pledge to use the full force of their companies’ resources to creatively and effectively increase public knowledge and urgency about the climate crisis.

The Potential Energy Coalition has organized this pledge in partnership with the Ad Council and Advertising Week New York to "galvanize those business leaders that have the most power to impact change."

The announcement was also timed to coincide with the Global Youth Climate Strike happening today.

“The leaders that have signed this pledge represent some of the world’s largest and most influential brands and have the power to drive change within the industry," explains Matt Scheckner, CEO of Advertising Week, adding this initiative is more important than just signing a pledge. "We’re proud that Advertising Week is a platform for these thought leaders to take this important stand.”

This isn't the first climate change pledge enacted by Adland executives. Earlier efforts have also drawn headlines albeit without much in the way of subsequent trackable impact.

In June, for instance, more than 50 primarily UK-based leaders including  executives from GroupM, MediaCom, AMV BBDO and Droga5, issued a call-to-action to limit global warming ahead of June 25's Climate Crisis Summit held in London, UK.

And last year several executives teamed up to form a supergroup of agencies to battle the issue.