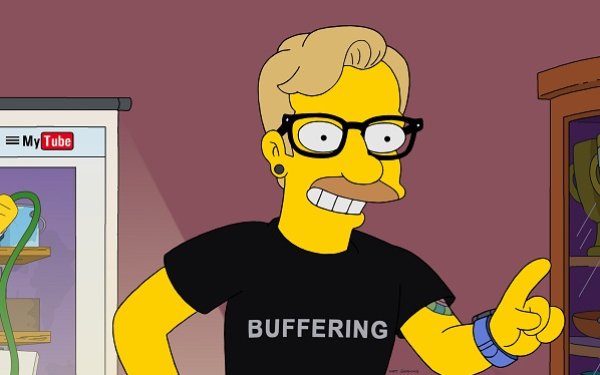 If the 31st-season premiere of “The Simpsons” is any indication, then the writers and producers of this revered show are mad as hell and they're not going to take it anymore.

Or to put it another way, “The Simpsons” comes out swinging this Sunday night (Sept. 29) with a brutal takedown of some of the prime movers of our current “culture” -- among them, so-called “social media influencers,” “tastemakers” and “monetizers.”

This episode is just 22 minutes long, but somehow manages to include (in no particular order): Two pieces of music -- the 1966 Lee Dorsey hit “Working In the Coal Mine” and “Ride of the Valkyries” from 19th-century composer Richard Wagner; fictional viral videos such as “Monkey Smells Finger and Falls Out of Tree”; a savage commentary on last season’s “Murphy Brown” reboot; and two fictional Internet sports talk shows -- “Tackling Dummies With Anger Watkins” and “Walkoff Homer With Homer Simpson.”

The episode makes satirical use of three real-life brands -- Netflix (identified with the slogan “Over-Indulging Writers’ Passions”), Axe male grooming products and Trident gum. The show makes repeated references to branding and re-branding, attacks the privatization of prisons and tosses around phrases that are commonly used in marketing circles today such as “regional casual dining establishments” and “changing the conversation.”

The central character in the episode -- titled “The Winter of Our Monetized Content” -- is a tattooed hipster/viral video marketing opportunist named Warburton Parker (pictured above). The name itself is a satire of the self-proclaimed “socially conscious” eyewear chain called Warby Parker. The character, pictured above, is voiced by comedian John Mulaney.

The episode has two stories. In the larger of the two, Homer and Bart are caught on video having one of their epic physical encounters in which Homer is seen in the act of strangling his son.

This one draws 5.7 million views on a video-sharing site called MyTube and also draws the attention of Warburton Parker, who shows up at the Simpsons’ house to pitch Homer on the idea of purposely making more viral videos in order to monetize his fights with Bart.

At one point, after a series of successful videos, the Bart-Homer fad fizzles and Warburton Parker proposes a reboot that will “change the conversation” -- in short: “BHB2” (Bart-Homer Brand 2.0).

In the other storyline, Lisa receives an undeserved detention at Springfield Elementary and learns that the school's detention system has been privatized.

Something has clearly gotten under the skin of the “Simpsons” writers and producers, and it might be the viral-video and Twitter-based culture in which a gullible population can be entertained for hours by a video clip of a monkey sniffing his own finger, and social media enjoys a Homer-like stranglehold on public opinion.

It is worth noting that the character of Apu and his beloved Springfield Kwik-E-Mart are nowhere to be seen in the show's season premiere.