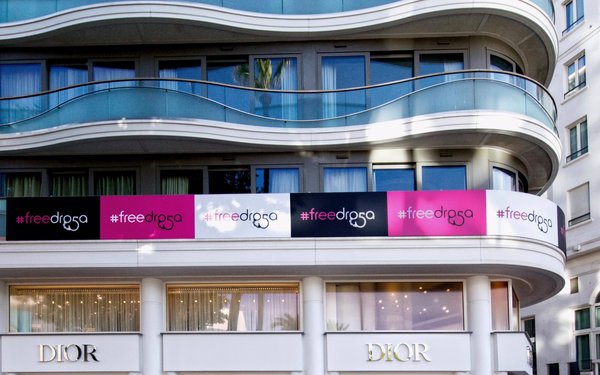 When New York-based independent agency Terri & Sandy launched a tongue-in-cheek message at Cannes 2019 to Droga 5 seeking to "free" the agency after it was acquired by Accenture Interactive, agency founders Terri Meyer and Sandy Greenberg had no idea what the reaction to this effort would be. At least that’s what Greenberg said today at an Advertising Week 2019 presentation.

"I was really nervous," says Greenberg. "I hoped our tone would be witty yet show the reverence that we have for Droga 5.”

For $20,000, the campaign included out-of-home signage at Cannes, as well as an airplane flying over the Palais touting the same call-to-action: #freedroga. A supporting GoFundMe drive sought to raise $475 million to repurchase the company back from Accenture.

The fundraiser raised $1,500 which was donated by Terri & Sandy to benefit the Malala Foundation. "I was surprised we raised that much as it was all in jest," says Greenberg. “Clearly, folks just wanted to join in on the fun."

The project was developed quickly, in under a week, Greenberg explained. The original concept grew from this year's Effie awards which named Droga5 as the top independent agency in North America, followed by Terri & Sandy. "It made us think, wait--Droga isn't independent anymore," she says. The two founders thought this campaign could be a clever, but beneficial way to promote their now "number one" status on the Effie index.

The campaign was a success, both in terms of solid metrics and viral acceptance. "That was my top worry even right before we launched--whether it would be understood as positive and fun,” says Greenberg.

R/GA was just one of the many public supporters and Terri & Sandy's website traffic jumped 875% in the few hours after the campaign was unleashed on the streets of Cannes. Greenberg adds "out of the thousands and thousands of comments, all were positive except one or two.  Surprisingly, David Droga himself declined to comment and an Accenture executive seemed confused by the initiative. "Which isn't that surprising to me," quips Greenberg.  Ultimately, the two founders believe the campaign might have had hit a deeper chord in the industry because so many people actually wish they could #freedroga.