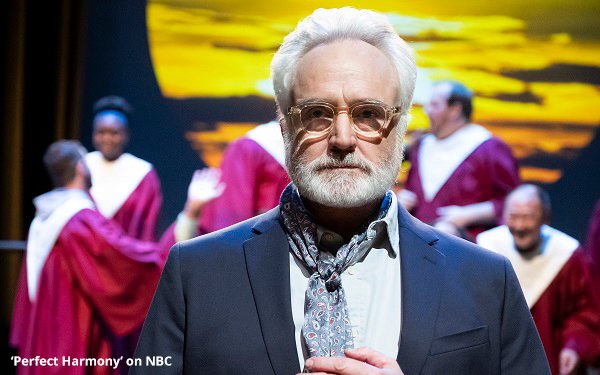 Why is it so surprising? Perhaps because, for whatever reason, this show feels under-promoted, although this is purely a subjective supposition.

Perhaps the TV Blog had not been watching NBC enough in the days and weeks before the season got officially underway this week, and thereby missed whatever promo spots the network was running in support of “Perfect Harmony.”

The TV Blog freely admits it stood in blissful ignorance of this show, including its length, its premise and even its status as a half-hour comedy. I thought it was a one-hour show with music, similar in some way to “Smash,” a musical drama series NBC aired for two seasons back in 2012-13.

Oh, well -- my bad, as the kids say. “Perfect Harmony” turns out to be a comedy about a less-than pitch-perfect church choir in rural Kentucky that suddenly gets a savior and is born again.

This savior is anything but Christ-like. He is a taciturn former professor of music at Princeton who has come to this Kentucky town to commit suicide following the death of his wife. It is her hometown and he has taken up residence on a sleepy section of a river in a barge converted into a supercool houseboat.

He discovers this choir while in the act of drinking in his parked car while contemplating suicide. It is at this moment that he hears this choir attempting to harmonize from inside a nearby church. So he postpones his suicide to go inside the church and stage a one-man choir intervention.

Whitford (pictured above) plays the professor perfectly. The character is sarcastic, sadistic and tyrannical in just the right way. And when the time comes for him to soften up just a little bit, Whitford gives it just enough -- not too much, and not too little, but just right.

His performance helps to reinforce what the TV Blog has long believed about actors and actresses on TV: They are people who get to the network-television level in their acting careers because they are among the best at what they do. The failings of many TV shows have nothing do with them, but more to do with what they are given by others to do and say. In a long career of reviewing TV shows, the TV Blog has rarely, if ever, criticized the actors.

Whitford's supporting cast is pitch-perfect too, including Anna Camp, star of the three “Pitch Perfect” movies. As for “Perfect Harmony,” the premiere episode was a joy to watch, easily the best new comedy the TV Blog has watched so far in the new fall season.

The title of “Sunnyside” refers to a section of New York City in the western part of Queens. Like just about every other part of Queens, the real Sunnyside has a diverse population of people from all parts of the world -- both recent and not-so-recent immigrants and/or the children of immigrants.

The show stars Kal Penn as a former New York City councilman who was tossed off the City Council following an embarrassing drunk-driving incident in which he was caught on tape trying to bribe a police officer. Penn is also a writer and an executive producer on the show.

In need of a new career and source of income, the character takes up with a diverse group of immigrants who seek his help in obtaining citizenship.

Yes, this is apparently TV's first immigration comedy. It is not unreasonable to assume that it was developed and created at this point in history because immigration is such a hot-button topic.

The problem is, however, that instead of celebrating immigrants and their diversity, the show traffics in stereotypes that are shocking in this day and age -- including the Latina mother who works untold numbers of jobs, a grinning African, a clueless Eastern European (he is Moldovan) and two louche, indolent, super-rich Asians.

The show is a clueless dud.