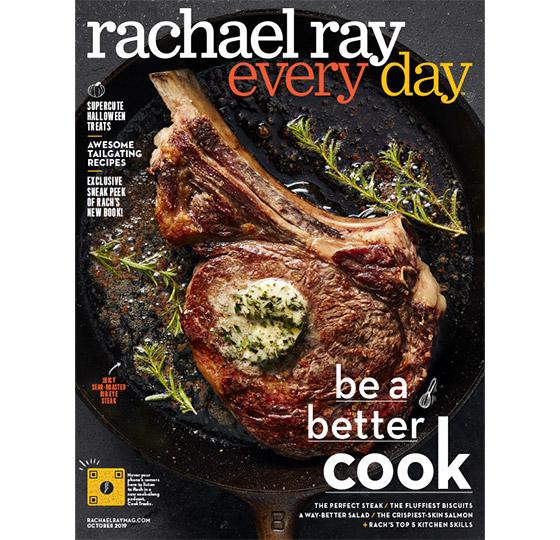 Meredith Corp.’s Magazines division is taking its cooking and lifestyle magazine Rachael Ray Every Day from a 10-time-a-year publication to a consumer-driven newsstand-only quarterly magazine, the company announced today.

Rachael Ray Every Day’s final issue at its current frequency will publish in December. The new quarterly issue appears on newsstands in January.

The title, launched in 2005, reports a circulation of approximately 1.7 million.

Lauran Iannotti will stay on as EIC and Karla Partilla continues in her role as publisher.

Iannotti has worked closely with Ray through the years. In October, Ray will publish a new cookbook called “Rachael Ray 50,” edited by Iannotti.

The quarterly publication will continue to deliver food and lifestyle content to its core group of readers, with higher quality paper stock, expanded content and rich photography, as the company evolves the brand.

“Each issue will be a much-anticipated treat for Rachael’s fans, who we expect will amass a collection and turn to it often for recipes, cooking instruction and life advice from their favorite ‘home cook’ and her inner circle of experts,” Iannotti told Publishers Daily.

Iannotti and her team will “continue to supplement the print product with original online content, including more video and exclusives with Rachael.”

The decision was made jointly between Meredith’s executive leadership team and Rachel Ray.

The company plans to work closely with the other platforms that are part of Ray’s $850 million multimedia empire, Olson added.

This includes coordination with “The Rachel Ray Show” on CBS and Food Network, her furniture and cookware lines and other upcoming projects.

According to Olson, this move will allow the Rachael Ray Every Day team to “optimize this beloved lifestyle brand with food at the core and position ourselves for future success.”

Iannotti noted, “The magazine has tremendous consumer appeal, and we’re looking forward to enhancing it by creating a premium product that will capture the essence of the Rachael Ray brand.”

Meredith Corp. has taken a similar path with some of its other lifestyle titles over the past few years.