New For Fall: Fox Half-Sister Drama Gets It Half Right 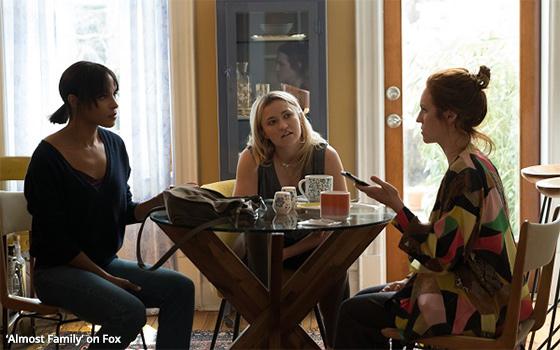 In “Almost Family,” premiering Wednesday on Fox, the three main characters are all young women around the age of 30 who suddenly discover they are half-sisters.

This comes to light because the man who apparently fathered them, a renowned New York fertility doctor, has just been discovered to have been secretly using his own -- ahem -- genetic material to make babies for scores of his women clients over a period of many years.

In the series premiere, this discovery becomes public via an investigative story published in The Wall Street Journal. And suddenly, dozens of former patients are flooding the doctor's fertility clinic with requests for DNA tests. This is how the three women all learn the truth about their birth origins.

The show is about how these revelations about their parentage will change their lives. Among other things, by the end of the first episode, these three (two of whom already know each other) will begin to take the first baby steps toward bonding as real sisters.

And since this doctor -- played by movie and TV veteran Timothy Hutton (who's terrific in the role) -- did this with so many women, the three young women are bound to discover even more siblings, both brothers and sisters.

In fact, one of the women learns that a man she has been hooking up with is one of these genetic half-siblings. She is naturally revolted by the prospect that she has unwittingly committed incest. Of the three women, this character, played by Brittany Snow (pictured above right), is the closest thing to a central character on this show.

She is a “real” daughter of this fertility doc. Or at the very least, she was raised by him, shares his last name (Bechley) and now works for him as communications director (translation: publicist) for his fertility clinic. The other two women are played by Megalyn Echikunwoke (above left) and Emily Osment (center).

In this show, two of the women are having sexual issues. The Brittany Snow character has too much of it and the Megalyn Echikunwoke character has too little of it. The former doesn't mind having her hook-ups in public lavatories and the latter is struggling with her sexuality.

By the episode's end, the Echikunwoke character is seen in the act of being unfaithful to her husband when she hooks up with another woman with whom she engages in a sloppy make-out session at the bar in an upscale Manhattan restaurant.

As for the Brittany Snow character and her sex life, the one tryst seen in the premiere of “Almost Family” is just like the frantic one seen last week in the premiere of “Stumptown” on ABC in which our two overheated lovers are seen tearing at each other like love-starved wolves in humans’ clothing.

In general, “Almost Family” feels flawed practically from the get-go because -- let's face it -- its very premise is, for want of a better word, icky.

Moreover, the pilot episode airing Wednesday abruptly changes tone about midway through when it must have finally dawned on the show's writers and producers that this subject -- a man who horribly defrauded what might turn out to be hundreds of families, leaving them to now sift through the emotional wreckage of their lives -- is serious stuff.

When the repercussions and ramifications of his actions begin to become apparent, the show loses the decidedly lighthearted air that it starts out with, and then suddenly turns deadly serious.

The premiere can leave one wondering which way this show plans to go as the plot thickens.