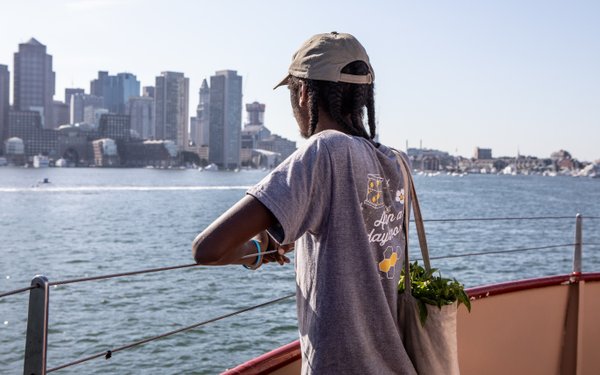 Boston-based casual fast-food chain B.Good hopes to “inspire the good in people” with a new series of video vignettes about its farm-based charity work with inner-city youths. Concurrently, it’s rolling out a new line of “flexitarian” burgers as a middle alternative to real meat and lab-based substitutes.

In the first of the video series, high school student Micah talks about his upbringing in the tumultuous Roxbury section of Boston and goes on a boat ride to B.Good’s Hannah Farm, located on an island in Boston Harbor.

“I’ve learned a lot being out here about the bigger picture on farming and how we actually affect the community,” he says of his involvement with the Farm Internship Program, a joint venture of B.Good and the nonprofit Camp Harbor View. “I feel like I’m bringing home more than just food.”

Hannah Farm and Camp Harbor View provide both a summer camp and year-round leadership development programs. Since 2016, the farm has produced more than 25,000 pounds of fresh vegetables and donated more than 75% of them to the city of Boston while exposing young people to farm culture.

The video series runs on B.Good’s own social media channels along with paid advertising on Facebook, Instagram and other platforms, plus native digital ad partnerships with The Boston Globe and Boston magazine.

“We wanted to start telling stories beyond our product and express things we believe while inspiring the good in people,” B.Good CMO Brent Feldman tells Marketing Daily.

Founded in 2003, B.Good was an early farm-to-table restaurant provider that has expanded to 65 U.S. locations in 13 states, mainly in the Northeast, Midwest and South.

Observing the rise in the popularity of meat substitutes, the chain conducted consumer tests before settling on a new four-burger line featuring ingredients like beans, beets, chickpeas, rice, pineapple and wild rice.

“If we were being true to ourselves, we would need to be using whole ingredients that everyone’s familiar with and really be from the land and not the lab,” says Feldman. “We want to celebrate the vegetables, not that they taste or behave like meat. We chose this middle path as a way to give people what they wanted, but do it in a way that was true to ourselves and our brand.”

The burger line launched last week. “We’ve seen tremendous results beyond my expectations so far this early, and we plan on growing it by adding more patties to it and more blended burgers.”

B.Good is expanding beyond its typical digital-media-focused venues to promote the new line.

“For this initiative, we added in some more traditional, bigger-reach vehicles like out of home, and we’ve done some radio in certain markets, which is also new for us,” Feldman says.

The company worked with the Fair Folk agency on the Hannah Farm video series and handled creative for the new burger line in-house.