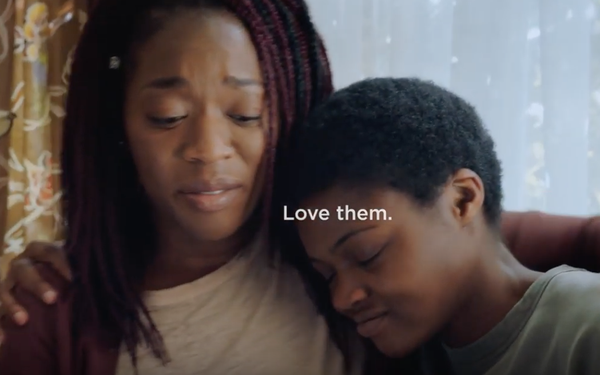 Several organizations and agencies are turning their attention to National Coming Out Day, which is Oct. 11.

Coming out is still a big deal for the LGBTQ+ community, so the Los Angeles LGBT Center has created an emotional set of videos that highlight how family acceptance is critical to the mental health and well-being of LGBTQ youth.

Created by agency RPA and directed by Station Film’s Lena Beug, the videos feature a cover of “What’s Love Got to Do With It?” performed by Rose Cousins (the use of which was donated by the publishers).

The first video puts parents at the center of the conversation around coming out and tells the story of teens who aren’t afforded the luxury of “stereotypical” teenage heartbreak, like being left out of the “cool kid” club at school. LGBTQ+ teens can experience an altogether different kind of heartbreak: their parents’ disappointment and rejection when they come out. The story then fast-forwards to the future, and the part two video shows parents who have learned ways to support their teen through the coming-out process.

The videos will live on the Los Angeles LGBT Center’s social channels and through donated media will be promoted on Twitter and shared by Team Liquid, and will air in select theaters throughout Los Angeles as well as on various TV and digital placements (all donated by Hulu, National CineMedia, Spectrum, Twitch, Twitter and Tubi).

“Now, particularly, the ongoing attacks by the federal government have ushered in a new wave of violence, hatred, and bigotry against our community,” Freter tells Marketing Daily. “Visibility is more important than ever. Knowing that you are not alone and a community of support is here for you is just as important.”

“We created the story in two parts as a way to draw attention to the fact that acceptance is a journey,” Mullin tells Marketing Daily.“Many parents of LGBTQ+ teens have questions and fears and hesitations when confronted with the truth, and sometimes, they don’t get it ‘right,’ right away. But ultimately, if they accept and love their children above all else, they can change the story of heartbreak that so many LGBTQ+ teens experience. It doesn’t have to be the end of the story.”

Another agency, Hundred Percent, is focusing on National Coming Out Day with a pro bono campaign for Rainbow Railroad, an international organization solely devoted to helping LGBTQI people in countries where it remains illegal to be “who you are” find legal pathways to safety.

Themed “Help Others Out,” three 60-second spots will run in-cinema and online. The spots feature Amin, Elton and Toni, all now able to live openly and in safety thanks to the continued efforts of Rainbow Railroad.

OOH and print will be running on donated media across the United States and Canada.  A social component encourages people to go to the organization's site to download an anonymous rainbow avatar for supporters to use on their social media profile pics and share messages of support for what Rainbow Railroad is doing.

In another effort, TikTok and GLAAD announced are partnering to raise awareness for National Coming Out Day by creating the #ThisIsMe campaign.#ThisIsMe provides TikTok users an opportunity to creatively celebrate themselves or show their support for friends and family in the LGBTQ community. For each video created using #ThisIsMe on TikTok, TikTok will donate $1 to GLAAD.

Finally, creative focusing on the day was created by The Integer Group. the commerce arm of TBWA\Worldwide, and a member of Omnicom Group Inc. The agency is launching the #ActOutInteger campaign to reflect a new internal approach to inclusion in the workplace. The effort includes a 4:27 long video.

“While diversity and inclusion have taken a front seat in the form of policies, employee network groups, and annual celebrations, propelled by societal demands, we believe we can -- and must -- do more,” said Ellen Cook, president, Integer\Dallas and Integer\Los Angeles, in a release. “We believe that there isn’t one specific day or one specific month to address the friction that many people face in the workplace.”