With regard to the recent changes Nielsen has made to its TV market measurements, the Media Rating Council says its accreditation of these markets has remained unchanged.

Earlier this month, Nielsen made changes to its TV audience estimates in the 25 markets that use Local People Meters (LPMs), and in the 31 markets using set-based TV meter panels.

All LPM markets, and 19 of the set meter markets, will now include Nielsen’s Portable People Meter (PPM) panel data. The remaining 12 set meter markets will add Return Path Data (RPD) from cable and satellite operators through agreements with Nielsen, in calculating the markets’ TV viewing.

Accreditation for persons-level demographic estimates was removed for these markets in 2015.

Prior to its marketplace introductions, MRC audits were performed on the new measurements.

Although a recent MRC audit noted a number of issues not fully resolved, the audit committee said progress was made on these matters. It therefore chose to keep the existing MRC accreditation status unchanged in LPM and set meter markets in adding PPM data.

MRC has set a deadline for unresolved issues to be addressed by March 31, 2020.

The MRC says other Nielsen TV markets where RPD data has been incorporated so far -- including Code Reader and Nielsen’s RPD+ markets -- have yet to be submitted for accreditation. 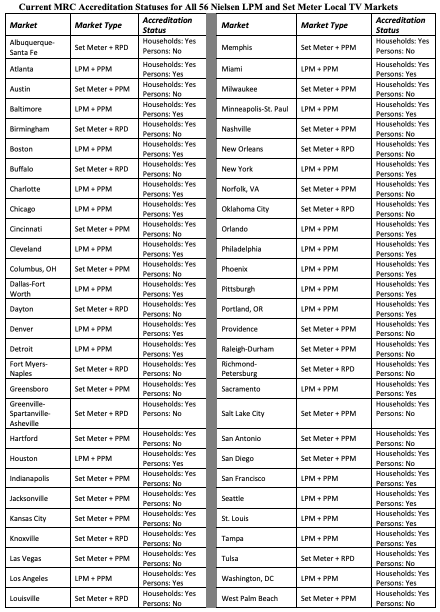