Self-Driving (And Flying) Around The Corner: Panelists At Synapse Orlando 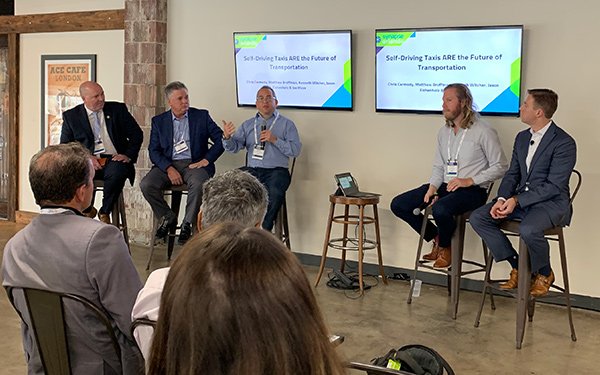 Autonomous vehicles are well under development, but a panel of industry experts suggests they will come to market slowly due to issues ranging from technology to regulations.

The panel discussion “Self-Driving Taxis Are the Future of Transportation” opened today’s Synapse Orlando conference, a spinoff from the annual Synapse Summit in Tampa, a conference and exhibit event targeted to innovators, corporations, entrepreneurs and investors.

“The regulatory and insurance bar is much higher for self-driving cars,” said Jason Eichenholz, chief technology officer of Luminar Technologies. “We want to get the performance of self-driving cars equal to human drivers.”

He suggested that autonomous vehicles would be phased in slowly, such as by using vehicles at low speeds on fixed schedules and routes, then adding the dimension of a mobile app for summoning and eventually expanding the geofence area with full situational awareness.

“The regulatory environment in Florida is extremely supportive,” he said.

The biggest learning relating to self-driving vehicles so far is “the human factor,” said Joe Moye, CEO of Beep, which has autonomous vehicles targeted to closed communities.

The discussion also included those that could fly.

“By 2025, we will have VTOL (vertical take-off and landing) operating in Orlando,” said Matthew Broffman, director of innovation, City of Orlando, adding that the vehicles would still have pilots at that stage.

The panelists agreed that the local market for innovation relating to autonomous vehicles is strong.

automotive, iot
1 comment about "Self-Driving (And Flying) Around The Corner: Panelists At Synapse Orlando".
Check to receive email when comments are posted.
Next story loading