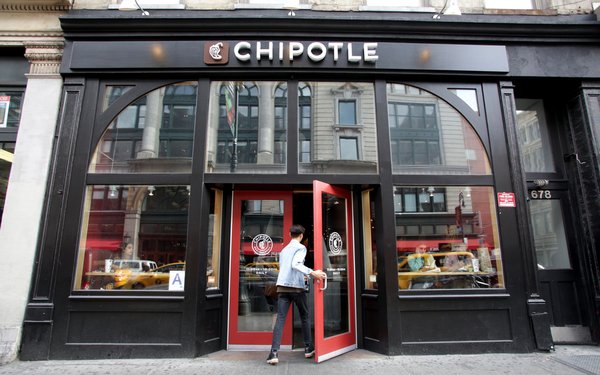 Comparable-restaurant sales grew by 11% in the just-ended third quarter, while transactions rose by 7.5%. A customer-loyalty program launched in March now has 7 million enrolled members. “And we have only scratched the surface on database marketing,” Niccol noted.

Digital sales, which tend to have a higher average check, amounted to $257 million in the quarter—representing 18.3% of overall sales.

An unspecified portion of the sales growth was attributed to Chipotle’s new carne asada menu item, which consists of sliced, premium steak garnished with lime, cilantro and various spices. Carne asada has been promoted nationwide with a new iteration of Chipotle’s "Behind the Foil" media campaign, in partnership with director David Gelb, creator of the Netflix series Chef’s Table.

Despite generating “terrific customer feedback,” the company will run out of carne asada in November or December, having been launched as a limited-time offering to supplement its traditional steak item, according to Niccol. “What we’re seeing is, it’s sourcing new users, as well as having people that have been users of the Chipotle business to try a new occasion.”

Chipotle is still testing queso blanco, which features two types of aged cheese and an assortment of peppers. It’s available as a side with chips or on top of any burrito bowl.

The chain’s new rewards program is just beginning to yield customer insights that can be leveraged based on individual behavior.

“We are already starting some experimentation with the various cohorts,” said Niccol. “The good news is, when we have done some of these experiments, we’ve seen meaningful changes in peoples’ frequency and their engagement levels with the brand.”

Operationally, Chipotle has completed installing digital “make-lines” in selected restaurants where food is cooked exclusively for digital orders. In addition, it’s been adding what it calls Chipotlanes — for the fulfillment of digitally placed orders — to both existing and newly constructed restaurants.

Chipotle operates 2,530 U.S. locations in all 50 states, ranging from a high of 415 in California to single locations in Mississippi, North Dakota, Vermont and Wyoming. The overwhelming majority of its restaurants are company-owned as opposed to franchised.