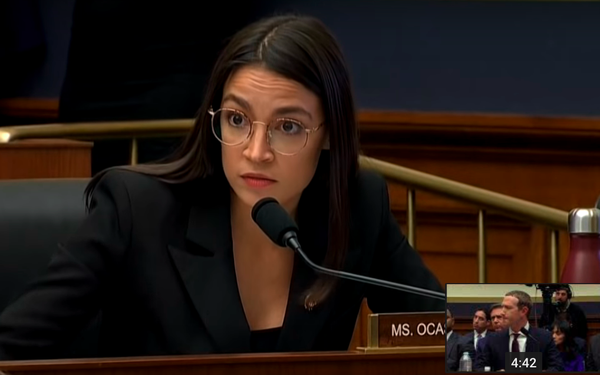 Mark Zuckerberg may believe lying is bad, but when it comes to political advertising, he's not going to do anything about it. Or is he? The answer wasn't exactly clear from his testimony before Congress Wednesday, especially when he got grilled by New York Congresswoman Alexandria Ocasio-Cortez (AOC).

I'm not saying Facebook's CEO was lying, but he wasn't exactly clear about what Facebook will and will not do when it comes to disinformation perpetuated by political advertisers.

Or, as OAC asked, "Is there some threshold" the social network will or will not step over?

You can read the verbatim testimony transcribed or watch a video of it below, but Zuckerberg made it clear that Facebook's actual policy is anything but.

Granted that Zuckerberg was there mainly to make an appeal to Congress to support his ambitious cryptocurrency plan for Libra, but as AOC noted, it's important to understand a person's past behavior in order to make decisions about their future behavior. And since Facebook clearly has not behaved as a responsible gatekeeper of politically divisive disinformation in the past, Zuckerberg was ripe for the grilling.

AOC began with an egregious hypothetical example -- targeting Blacks with ads promoting the incorrect election date in the 2020 campaign.

Zuckerberg indicated that would go over the line, but when AOC asked him if she could run ads claiming Republican candidates voted for the Green New Deal, he said, "probably."

When AOC pushed him on that, Zuckerberg said he thinks "lying is bad," but that it's not Facebook's responsibility to moderate that kind of disinformation.

It's another example of Facebook not taking its role as a distributor of information seriously  -- and I believe, another cause to consider regulating it.

More Americans now get their news from social media than they do from broadcast news media, which continue to operate under strict regulatory and self-regulatory guidelines.

It is the self-regulatory ones -- the internal standards and practices, including ones applied to political advertising -- that continually demonstrate why broadcasters have earned our trust. Yes, their practices are still tied to regulatory concerns, but it is part of their culture and DNA to self-regulate.

And when industries and companies within them prove consistently that they operate with reckless disregard for the good of society, it is up to regulators to step in and pass laws -- or at the very least, put enough pressure on them that they will create necessarily self-regulatory processes.

That's exactly what happened when the broadcast industry faced a crisis of confidence following Congressional hearing in the 1960s on the TV ratings business, and the solution was a self-regulatory body -- the Media Rating Council -- which was created as part of a consent decree with the Department of Justice to avoid actual federal regulation.

That has worked well for more than half a century, and it is a good model for digital media.

But whether it is an industry watchdog like the MRC, or just stringently observed and publicly stated internal standards and practices, self-regulation is the best way to avoid federal regulation. Based on Zuckerberg's most recent testimony, I don't see it happening anytime soon.

Alexandria Ocasio-Cortez: Official policy now allows politicians to pay to spread disinformation in 2020 elections and in the future, so I just want to know how far I can push this in the next year. Could I pay to target predominantly Black zip codes and advertise them the incorrect election date?

Mark Zuckerberg: No, Congresswoman, you couldn’t. We have, even for these policies around the newsworthiness of content that politicians say and the general principle that I believe.

AOC: But you said you are not going to fact-check my ad.

Zuckerberg: If anyone, including a politician, is saying things that is calling for violence or could risk imminent physical harm, or voter or census suppression when we roll out the census suppression policy, we will take that content down.

AOC: So, there is some threshold where you will fact-check political advertisements? Is that what you’re telling me?

Zuckerberg: Congresswoman, yes, for specific things like that, where there’s imminent risk of harm.

AOC: Could I run ads targeting Republicans in primaries saying they voted for the Green New Deal?

Zuckerberg: Sorry, can you repeat that?

AOC: Would I be able to run advertisements on Facebook targeting Republicans in primaries saying they voted for the Green New Deal? I mean, if you’re not fact-checking political advertisements, I’m just trying to understand the bounds here. What’s fair game?

Zuckerberg: Congresswoman, I don’t know the answer to that off the top of my head. I think probably.

AOC: So you don’t know if I’ll be able to do that?

AOC: Do you see a potential problem here with a complete lack of fact-checking here with political advertisements?

Zuckerberg: Well, Congresswoman, I think lying is bad. And I think if you were to run an ad with a lie, that would be bad. That’s different from it being, in our position, the right thing to do to prevent your constituents or people in an election from seeing that you had lied.

AOC: So you may flag that it’s wrong, but you won’t take it down?

Zuckerberg: Congresswoman, it depends on the context that it shows up -- organic post, ads -- the treatment is a little bit different.

AOC: One more question. In your ongoing dinner parties with far right figures, some of whom advance the conspiracy theory that White Supremacy is a hoax, did you discuss so called social media bias against conservatives and do you believe there is a bias?

Zuckerberg: Congresswoman, I’m sorry, I don’t remember everything that was in that question…

AOC: That’s okay, I’ll move on. Can you explain why you named the ”Daily Caller,” a publication well documented with ties to White Supremacists, an official fact-checker for Facebook?

Zuckerberg: Congresswoman, sure. We actually don’t appoint the independent fact-checkers. They go through an independent organization called the Independent Fact-Checking Network that has a rigorous standard before they allow to serve as a fact-checker.

AOC: So you would say White Supremacists tied publications meet a rigorous standard for fact-checking?