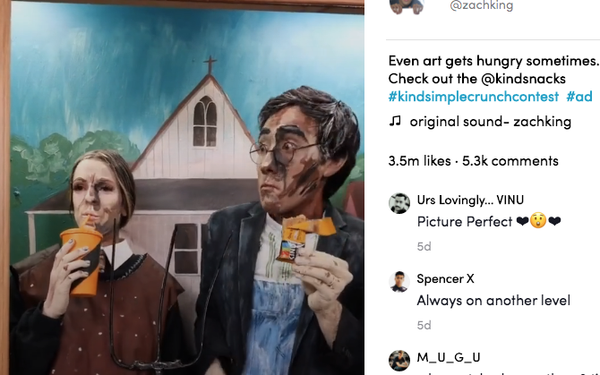 Kind Healthy Snacks says it’s the first national snack brand to harness the popularity of the TikTok short-form mobile video platform in its launch of Simple Crunch bars, along with a contest for TikTok users.

The company aims to reach a young audience that doesn’t watch much television and get them to create videos that emphasize the sound of people crunching the snack bar.

“When creating Kind Simple Crunch, we learned that crunch is one of the most important textures for consumers when they are looking for a snack,” said a company spokeswoman. “Therefore, we created our crunchiest bar yet, and are utilizing ‘sound on’ content as a campaign thread.”

Whoever creates a video that features Simple Crunch with the hashtag #kindsimplecrunchcontest and generates the most views will win a free trip for two to New York City and a year’s supply of Simple Crunch bars.

Kind is partnering with several paid influencers on TikTok to promote the campaign and contest. In one video, TikTok star Zach King is seen touring an art museum while drinking from a water bottle before being led away by security. At this point, the husband and wife farmers depicted in the iconic American Gothic painting come to life, and the pitchfork-wielding husband munches on a Simple Crunch bar.

Asked how Kind will judge the effectiveness of its presence on TikTok, the spokeswoman said the campaign is “strictly to build awareness for Kind on a new platform and highlight its new innovation. We will measure success through the organic views of our hashtag and engagement with content on our owned channel, as well as with paid partner influencer content.”

Separately, Kind has created a partnership with Hope For The Warriors, an organization that provides assistance to combat-wounded service members and their families. One hundred percent of the proceeds from Kind’s limited-edition Heroes bar will be donated to Hope For The Warriors' Warrior's Wish Program, with a minimum donation of $10,000.

Earlier this month, Kind announced the purchase of High Point, North Carolina-based Creative Snacks Co., a family-owned company founded in 2009. In a statement announcing its first-ever acquisition, Kind said the addition of Creative’s product line, which includes almond and coconut nut clusters, trail mixes, granolas and pretzels, will enable it to “expand its share of the healthy snacking market through a now-broadened product portfolio and multi-brand approach.”