Advertising and marketing spending combined will outpace all of the ad industry’s conventional forecast growth by a percentage point this year and a point-and-a-half next year, according to an annual report being released today by industry economists PQ Media.

Combined worldwide advertising and marketing spending will rise 4.9% this year and 5.9% in 2020, according to PQ’s Global Advertising & Marketing Revenue Forecast 2019-23 report.

That beats a consensus of Madison Avenue’s leading forecasters' most recent estimates (see below) for 2019 global ad-spending growth of 3.9% by a full percentage point, and their 2020 consensus growth of 4.4% by a point-and-a-half.

The estimates suggest that other marketing expenditures are expanding at a faster rate than conventional advertising.

The PQ Media analysis includes more than 100 digital and traditional media platforms and channels in every major media market worldwide, and factors marketing channels likely not included by traditional Madison Avenue forecasters, such as the non-advertising components of direct marketing, promotion and public relations.

It also includes experiential marketing, which represents the most substantial category in the report, generating an estimated $115.4 billion in 2018.

While most mobile media channels are among the fastest-growing categories, the PQ Media report notes that “some major brands are reevaluating their digital media investments due to various strategic challenges, questionable tactics and privacy issues that have emerged in recent years.” 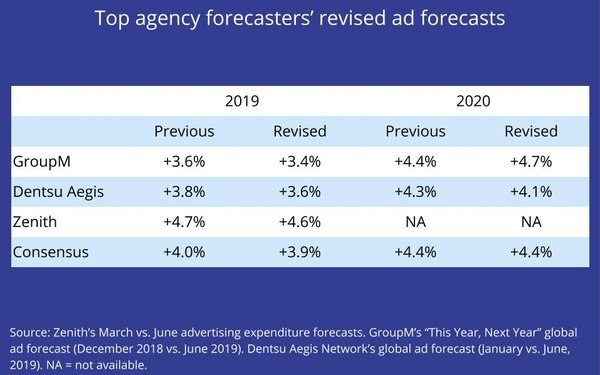