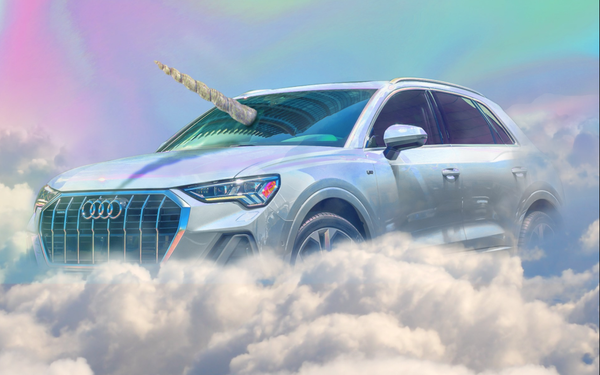 Audi of America has brought one of its most popular social media posts to life: the mythical Audi Q3 Unicorn, dubbed by fans the “Qnicorn.”

Inspired by an image created in collaboration with Gentleman Scholar, the Qnicorn continues the Audi “Q3 in :03” campaign to bring relevant content to the social media feeds of a younger audience.

The actual Audi Q3 is a “true unicorn of the compact-premium SUV segment,” according to the automaker. It attracts younger buyers to the brand with its design and functionality.

“Given the fan engagement and excitement for the mythical car on social media, Audi transformed the all-new Q3 into a real-life unicorn to bring joy (and candy) to customers and Halloween enthusiasts alike,” according to a release.

Staying true to the original post on social media, a custom-built three-foot-long unicorn horn was treated with shimmering gold paint infused with hints of purple.

The vehicle is wrapped in a pearlescent vinyl that produces dazzling rainbows when exposed to light. The available, and customizable, ambient interior lighting has been turned purple to bring some of the “magic” inside.

Audi took the costumed vehicle to Washington, D.C. to share its Halloween magic with fans while handing out candy. The mystical SUV started its journey at a local Cars & Coffee event, before heading to areas popular for millennials celebrating the holiday. The last stop for the Qnicorn was at the Inova Children’s Hospital in Great Falls, Virginia.