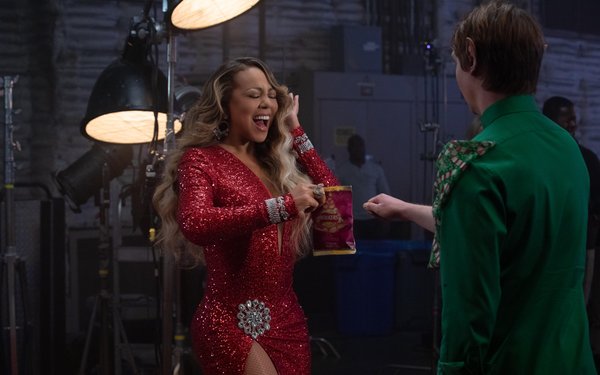 The campaign, created by AMV BBDO, features Walkers core product offerings as well as limited-edition edition flavors, notably Pigs in Blankets, although they seem secondary to Carey herself.

The ad opens with Carey singing her classic "All I Want for Christmas Is You" in a recording session setting. After it wraps, she is then seen walking around the set generously handing out presents, including a framed painting of Carey herself riding a winged unicorn.

One complication arises when Carey reaches for a final pack of Walkers chips at the same time as a man dressed as an elf. A polite tussle ensues, and Mariah decides to use her famous high note to get the elf to drop the bag, winning the chips for herself. The narrator says: "Walkers, too good to share."

“It doesn’t get more Christmassy than Mariah Carey singing 'All I Want for Christmas Is You' and that’s exactly what’s in our new [advertisement]," states Wayne Newton (though not THAT Wayne Newton), head of marketing at Walkers.

The film launched in a Twitter Spotlight 24-hour takeover on Saturday, Nov. 2, and will be followed by the TV debut during the "X Factor" finale. There are also video-on-demand, digital, and other components designed to reach a broad audience.

Carey will appear on promotional packs of Walkers up until Christmas, alongside a promotion that gives consumers the chance to "win all they want for Christmas," which in this case, means game consoles, designer headphones, cash and festive socks.

This extensive campaign kicks off the U.K.'s holiday advertising season, which is very like the U.S. Super Bowl, in which brands spend millions of dollars on initiatives in a battle to seemingly top one another in a popularity contest among consumers.