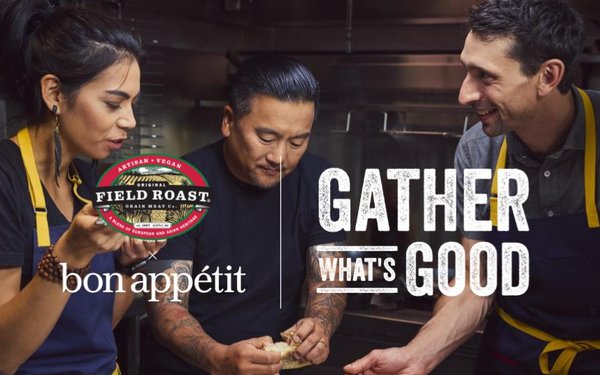 In addition to media, Spark Foundry’s content team led the creative conceptualization for the campaign.

He adds, once the agency built out the content program, it then worked closely with Bon Appétit to co-produce all elements of the program including access to regional chef talent and pop-up event activations.

The “Gather What’s Good” campaign centers on a docu-series following Choi as he visits chefs in Seattle, Chicago, and Toronto to learn about their signature dishes and challenges them to reimagine the dishes using FR's artisanal plant-based meat and cheeses.

In one episode, Choi chats with Abe Conlon and Adrienne Lo, co-founders of Chicago's Fat Rice, to learn what inspired their Chinese and Portuguese-inspired creations.

Also people were invited to submit their own homemade recipes using Field Roast ingredients via social media for a chance to be featured in Bon Appétit’s holiday issue.

The campaign is featured across Conde Nast social and/or digital properties including Epicurious, GQ, Pitchfork.